Exploring the Maritimes with NCC 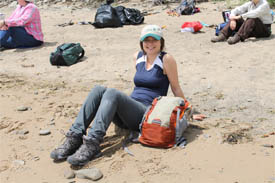 As a Haligonian (a person from Halifax, Nova Scotia), I’ve had little experience with the province of New Brunswick. I’ve driven through with my family, and I’ve camped at Kouchibouguac National Park with friends, but that’s about it. This summer, I worked in the Nature Conservancy of Canada (NCC) office in Fredericton, New Brunswick, but I wasn't always at my desk. With NCC, I was able to travel to several New Brunswick protected areas, including the Musquash, Escuminac and New Horton nature reserves.

In Musquash, our field team visited Black Beach (which holds up to its name with its graphite sand and cliffs), where we hiked the four-kilometre trail to look for areas needing maintenance. We then visited the Five Fathom Hole trail in Musquash, a five-kilometre trail along the Musquash River and Estuary, where NCC and other conservation groups have protected close to 90 per cent of its coastline. This trail was very rustic and provided many lookout points over the river and estuary, where you could see red spruce and fir trees all around the coastline. As a novice birder, I relied on my fellow interns to help me identify birds by sight and sound.

During the first Conservation Volunteers event of the season, Musquash Trailblazers, I hiked the trail again. But this time, I shared the experience with local volunteers and showed them what NCC has protected in the area. On our way to Escuminac to scout, we stopped in Miramichi and Kouchibouguac to promote our next event — Escuminac Bioblitz & Clean-Up. I never realized how many rivers there are in New Brunswick until now. The landscape is surprisingly different from Nova Scotia.

At Escuminac I walked the south beach with my fellow interns to monitor NCC properties. Here, there are peat cliffs over 10 feet tall at the edges of coastal bog that are approximately 9,000 years old. Within these peat cliffs, we saw hundreds of little holes along the top layers that are created by bank swallows for nesting. As we walked along, these swallows would fly out of the holes behind us and fly in pairs over our heads. From the lighthouse at the point, we could see peat cliffs on the beaches at either side, and see out into the Northumberland Strait. During this volunteer event, our volunteers helped us collect marine debris from the beaches, and we were fortunate enough to have an expert zoologists how us how to catch and identify butterflies in the bogs and fields that I had come to know.

A few weeks later, we drove up to the New Horton Nature Reserve; a trip that took us through the beautiful Fundy National Park and town of Alma, where there are massive hills and views of the Bay of Fundy. We hosted the New Horton Trailblazers event, where volunteers helped us trim back sections of the trail that
were overgrown down to a small and pristine beach where we collected a few bags of garbage. The tide was in and Tom’s Island, a small but very tall island with vegetation that seems strangely out of place, was completely surrounded by water.

Despite the blood-thirsty mosquitoes eating my arms and legs the entire time, this may have been my favourite spot of the summer.

Another trip with NCC was to the five MurrayHarbour islands in Prince Edward Island, where we hosted the volunteer event Murray Harbour Kayak & Clean-Up. Here, NCC has helped to preserve Reynolds Island, and is currently working to protect Thomas Island. We had a great turnout for this event, with 22
volunteers in kayaks helping to clean up marine debris.

Some of my family members are islanders, so I visit PEI every summer, though I’d never been to Murray Harbour before. Kayaking out from this little beach out into the ocean to Thomas Island was exhilarating for a nature-lover. There were thousands of jellyfish on the red sands, cormorants feeding off the water, juvenile bald eagles and osprey soaring, and curious harbour seals poking out of the water now and again. Together, we collected around one ton of marine debris off the islands, which was a very satisfying and rewarding experience.

It was a great season with many memories. Not only did I learn a lot; I got to know Nova Scotia's neighbouring province a little better, too.