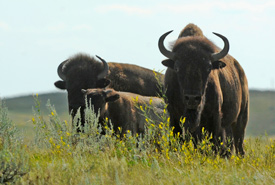 Every day, countless inspiring and informative stories are published about conservation successes or discoveries in nature and wildlife around the world. Here are some that caught our attention in February 2017:

Scientists recently discovered a beetle species that hitches rides on ants by biting into their waists and mimicking their backsides.

Hitch a ride to the story here >

A new gecko species, named the fish-scale gecko, with tearaway skin and scales has been discovered.

Tear into the story here >

Silence of the crickets

More than 25 per cent of Europe’s grasshopper and cricket species are nearing extinction.

Plains bison are back in plain sight

During an ice fishing excursion on an Indiana lake, a pair of brothers made a grim discovery: a frozen pike in the midst of eating a bass.

An environmentalist and underwater photographer discovered the candy-striped hermit crab in Bonaire’s National Marine Park, which could have a symbiotic relationship with moray eels.

Get a taste of the story here >

The survival of algae samples exposed to space for 16 months could provide food and oxygen for Mars explorers.

Expose yourself to the story here >

More than 200 beached pilot whales in Farewell Spit, New Zealand, managed to refloat themselves back to the ocean.

Float to the story here >

According to scientists, small crustaceans inhabiting the ocean’s deepest regions have been found to have high human-produced toxin levels.

Scientists are quickly trying to document rare plants that inhabit Cambodia's karsts before the limestone cliffs are turned into cement.