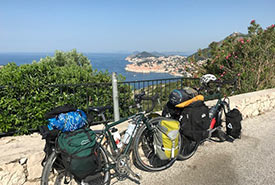 “Holy smokes, this is stunning!” I exclaimed for the umpteenth time. “This is not at all what I was expecting.”

I’m not entirely sure what I was expecting when my husband and I embarked on our self-supported two-week cycle tour of Croatia. I knew there would be mountains, I knew the coastline would feature azure waters and postcard-worthy beaches, and I was pretty certain it was going to be hot and humid. 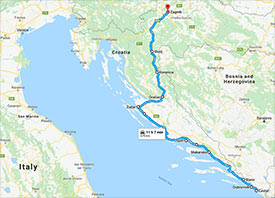 When planning the trip, we concentrated more on the logistics, daily distances and campsite locations. We didn’t spend a lot of time researching what the country actually looked like. We figured we’d find out when we got there.

One of the joys of seeing a country by bike is the speed at which you pass through. Pedalling a bike laden with 35 pounds of gear allows you to see the beauty at a snail’s pace. Your senses are engaged. You can, literally, stop and smell the roses at a moment’s notice.

Our 750-kilometre, 11-day route took us from just south of Dubrovnik to Zagreb. We started by heading north up the Dalmatian coast, from Cavtat to Zadar. From Zadar, we then turned east (inland) toward the capital. 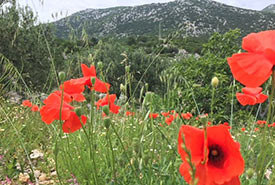 As we cycled the narrow, undulating road along the coast, our eyes were treated to gorgeous Adriatic beaches tucked into coves. Poppies lining the road gave way to flowers of every colour imaginable (My kingdom for a botany degree). Olive and fig trees dotted the landscape, as we salivated at the thought of eating fresh-from-the-tree olives and figs. 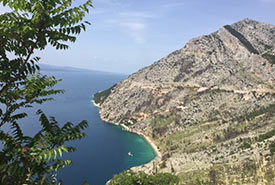 The constant coo of mourning doves and the melodies of countless unknown (to us) songbirds provided a welcome break from the sound of vehicles rushing by us on the shoulder-less road. During breaks in the traffic, chirping crickets could be heard at decibel levels worthy of a 1970s The Who concert.

The smell of lavender permeated the air — a welcome change from the aroma of two sweaty cyclists.

And that was just the coast. We did not know what awaited us on the other side of the mountains. 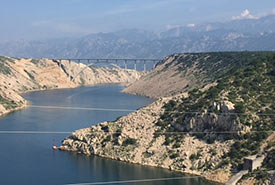 Departing the coastal views for a change of scenery as we cycle inland toward Croatia's capital. (Photo by Gayle Roodman/NCC staff)

We turned our trusty steeds eastward at Zadar. Within minutes, we left the coast behind. What lay ahead felt like a whole new country. Lush, fertile and green at every pedal stroke.

My husband and I have fond memories of childhoods spent in fields and pastures, often just at the end of the street or within a 10-minute bike ride away. Places that were untouched. Places that held promises of hours of exploration. Places with creeks, flowers, ponds, frogs and trees. Places where memories were made.

Fast forward, and these fields are no longer, having succumbed to development. But this part of Croatia felt like the fields of our childhoods. Unspoiled and natural.

The olive and fig trees of the coast were replaced by fields and pastures, both wild and farmed. Mingled between were green hills dotted with rocks and alpine flowers. When we stopped by the roadside for breaks, we watched the countless bees and butterflies making their rounds among the fields.

The endless road-side fruit and vegetable stands were proof that this was fertile farmland we were pedalling through. Homemade honey and cheese were also on offer. I’m a sucker for road-side stands; thankfully weight and volume are limiting factors when on a bike. 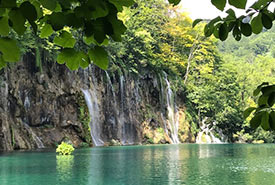 Plitvice Lakes National Park, one of the oldest and largest national parks in Croatia. (Photo by Gayle Roodman/NCC staff)

And then we hit Plitvice Lakes National Park.

A UNESCO World Heritage Centre, Plitvice Lakes was, in a word, otherworldly. Within its 72,851 acres (29,482 hectares) lie 16 blue and green terraced lakes that fall into cascading waterfalls. Almost two-thirds of the park is forested. The area provides habitat for brown bear, wolf, wild boar, 55 species of orchid and countless species of birds. While exploring the park on foot, we were never far from the sound of waterfalls. Our eyes scoured the plants, taking in the different types of orchids and butterflies we saw.

The two-day ride from the park to Zagreb was essentially flat (by Croatian standards) but no less spectacular than the preceding nine. As we cycled through the valley, flanked on either side by the receding mountains, the colourful spectacle that is Croatia did not wane. Verdant pastures, emerald green forests, grasses and flowers lined the road into the capital.

On our last couple of nights, instead of camping, we opted for a lovely room in a house near the Zagreb airport so that we could pack our bikes for flying and sleep in a real bed. As we bid good night to a Croatia that delighted us, and far exceeded any expectations we may have had, we could hear the nearby rooster preparing for our early morning wake-up call.

This trip was not the first time either of us had used bike touring as a way to explore a country. And it certainly won’t be the last. I encourage you to consider packing up your belongings and heading out on your own bike tour. There are no end of online resources out there if you’re not sure where to start. There is really nothing quite like the utter joy of experiencing the natural world from the seat of a bike. And as Ernest Hemingway once said, “It is by riding a bicycle that you learn the contours of a country best, since you have to sweat up the hills and coast down them.”