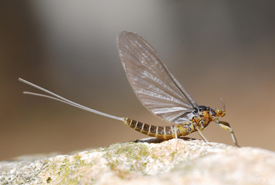 For many, spring can often be hard to pinpoint. A botanist may list countless flowering plants, a birdwatcher may look to the skies in search of spring in the form of returning melodies, while Homo consumeris will notice the piles of winter clothes in the clearance section of stores. All the obvious and subtleties of spring cross timelines, each with their own beginning and purpose, but the message is clear: change is on the horizon.

I read an interesting pamphlet-sized pocketbook titled The Phenological Fly: A Method for Meeting and Matching the Super Hatches of the West by the late Albertan Bob Scammell where he correlated flowering streamside vegetation with the awakening of aquatic wildlife: "Walleye run when the cottonwoods bloom and blow," or "Goldenstones emerge when the wild roses bloom."

To me, the coming of spring has never been the celestial equinox or the arrival of the robin. I was recently fly fishing in a nice little spot in the winter, which can be challenging, with my partner. Small midges were gliding across the flowing water and, for a time, rainbow trout were rising eagerly to eat them. A short flash of pent-up life reminiscent of spring. 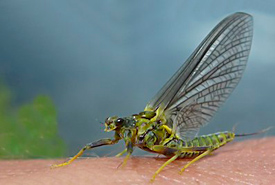 In spring, I watch for a particular little aquatic insect with an endearing name: the blue-winged olive (BWO) to emerge from the water as a dun. As a mayfly, BWOs hatch from their eggs as nymphs in clean, fertile waters, such as rivers around western Alberta. As a nymph, they mainly graze on aquatic vegetation and algae, and are capable of swimming in a darting-like action — similar to minnows — with undulating motions of their bodies. They prefer slower back eddies or pools where they aren’t constantly fighting the perpetual currents. Their size varies from species to species, but mature nymphs measure anywhere from four to nine millimetres and are yellow/amber to olive in colour. They will develop a black wing-case on their backs at peak maturity.

When water temperatures reach around 5 to 7 °C, BWOs float to the surface of the river, aided by captured gases within their bodies, to emerge en masse from their nymphal skins. Once they penetrate the water’s surface, which is quite difficult for an insect the size of large grain of rice, they split their skin and emerge as a dun. Many “drown” in the water’s surface film, unable to break free of the tough meniscus. You could consider the dun as the adolescent with one focus in life: the opposite sex. 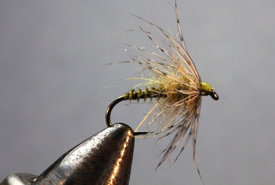 This mass emergence, which can fill the water’s surface with thousands of tiny wings upright like sails on a turbulent sea, can be mesmerizing. Once they dry their wings, they take off to the riverside vegetation and take part in one more emergence: to the adult spinner stage. In a setting sun, the light illuminates their smoky blue wings and fills the sky with fluttering dots of yellow, all lazily moving to the riverside banks. Their appearance has now changed from the robust, olive duns with the characteristic smoky blue wings to a slender, rusty red mayfly with clear wings, long tails and oversized front legs (for grasping the females).

Male BWOs fly over the water’s edge, grasp a female and mate — their last living act. At each stage of transition, these insects offer a massive influx of available calories for winter-starved trout.

This spring, I will watch the rivers for subtle signs of things to come. An awakening of submerged life ready to burst into adulthood.