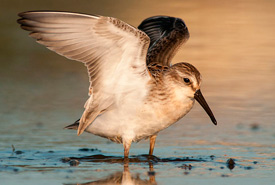 Each week, countless inspiring and informative stories are published about conservation successes or new discoveries in nature and wildlife around the world. Here are some of the conservation and nature stories from around the globe that caught our attention the week of October 17, 2016:

Thanks to a conservation effort in Fundy National Park, more than 500 mature Atlantic salmon were successfully released into two of the park’s rivers. Since 2001 there have been problems with the species' population levels within the park. A unique plan has been devised to rehabilitate Atlantic salmon populations, leading to the largest release of the species here to date.

Australian scientists have discovered a new method for anticipating the extirpation (local extinction) of frog species in the face of climate change. This new model will hopefully maximize the time for action in order to save endangered frog species before they disappear.

Scientists have found a totally groovy difference between the ways whales speak. Depending on their geographical location and generation, sperm whales will develop different dialects in order to communicate. Similar to humans, whales from different clans will use different lingos. Dude, talk about some sick research.

The binturong, or "bearcat," is one of India’s most juxtaposed species. This tree-dwelling, part-bear, part-cat species with a tail like a monkey is a mixed bag; so much so, it has its very own genus. To mark its territory it leaves a scent resembling movie popcorn, although the binturong’s story may not have a happy ending, as the species is threatened due to logging and poaching.

The proposed port expansion for southern Vancouver may mean bad news for migratory birds. Populations of western sandpiper in particular are considered the most at-risk species who may be affected by the development, as the port could impede their flight path.

Fly over to the story here >