From wasteland to wonderland: Why we need wetlands, before it’s too late 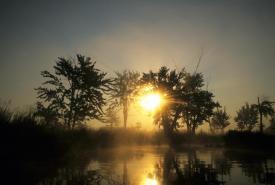 I sometimes think I need to find a support group for people that are haunted by ecological guilt.

To be honest, I mostly feel pretty good about my past as an environmental consultant before joining the Nature Conservancy of Canada (NCC). People need houses, roads, aggregates, and most of these are put in the right places though smart land use planning and environmental assessments. I often point out areas we worked on to my kids as we drive through southern Ontario and explain how key habitats were protected or, in some cases, even enhanced.

Except there’s one place I don’t ever talk about when we drive by it. I actually don’t even like to think about it. One day I might be able to rationalize and maybe even recover from the troubling guilt I feel, but this place will never recover from what we did to it. 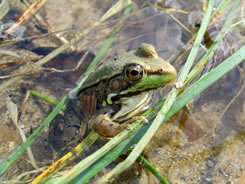 A place that should have been saved

Okay, here’s the story. I can’t provide details, but let’s just say this is a site located in central Ontario, near a major highway. I was tasked with conducting a biological inventory to support an environmental assessment. Part of this site was definitely lower quality — former agricultural land dominated by common, even weedy plants. Through the lens of an environmental assessment, this was a good place for humans to build new human habitats.

A little further back on the property was a small stream. Stream scientists would call it a first order stream since it would feed into another stream that would then feed into a larger river. Around this stream was a large wetland. This wetland included scattered trees, sedge meadows, shrubby thickets and lots of moss. Both this stream and the wetland got most of the their water from groundwater — water was moving though the soil, probably starting up high on a hill, and then was forced out of the ground in this lower area.

Biological magic seems to happen when water comes out of the ground. Just like an oasis in the desert, an oasis of life and abundance is created where clean, fresh groundwater percolates to the surface. This was a place of high ecological values. A place where water is purified, a place where fish live and spawn, a place of specialized plants and animals, a place that had existed for thousands of years. A place that should be saved.

Sometimes bad planning unfortunately happens, even with good scientific information. We mapped the wetland with its special habitats and meandering stream. We made lists of the unique plants, abundance of frogs and richness of bird species. We made recommendations that this place, of all the places on the property, should be considered high priority for saving.

But it wasn’t. That map and species list became an obituary. An ancient chorus of a thousand profound little voices that no one heard, lost forever.

I’ve stood where the wetland was and I feel bad. I’ve walked through the parking lot and wondered what has been encapsulated in pavement, wondered what has been lost. I muse at the changed fate of a drop of rain that now falls here. What would have been a lingering hydrological journey though leaves, through peat moss and soil and through small cold streams now happens in a flash of sheet flow over hot asphalt, through car tires, cigarette butts and metal grates into a storm sewer. I wonder about the buried trees and seeds that will never see sunlight. I wonder about the trout living downstream that once travelled up the small stream for food and for safety, and what they think when they now find a culvert that dumps warm dirty water. 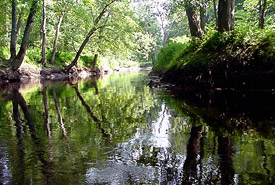 Maybe who ever made the planning decision didn’t know about wetlands. Maybe they thought they were wastelands, and like has been done in generations before, places that should be filled, drained and developed.

This attitude is rooted in a strong tradition. In southern Ontario alone we have lost over 70 percent of our wetlands. In addition to losing species and habitats associated with these wetlands, we’ve also lost some of the best flood management and water purification infrastructure we had.

In the Greater Toronto Area, where over 56 percent of wetlands have been lost, that means there are over 600 billion litres of water (the equivalent of 250,000 Olympic-sized swimming pools) that is no longer stored and flows unfiltered and unabated into our rivers and into Lake Ontario. We’ve definitely underestimated the value of these wetlands in the past.

The true value of of wetlands

Fortunately, there is a growing recognition in the need to save and restore our wetlands. Many private landowners are protecting wetlands on their properties, some local municipalities do protect their wetland through planning policies and NCC has worked with partners to conserve more than 17,000 acres (6,880 hectares) of wetlands in Ontario over the last five years. Just some days, especially when I think of that parking lot, I’m not sure this is enough.

The parking lot I occasionally visit sits on a wetland that once provided the local community in more than $200,000 of free benefits annually, including clean water, flood protection and happy fish.

You don't know what you've got till it's gone

Sometimes we don’t fully appreciate the value of nature until it has slipped through the fingers of a generation. I was recently in Toledo Ohio, where so many coastal wetlands on Lake Erie have been lost. The community is now investing in creating new wetlands in places where they have been missing for over a century. Within only a few years, these new wetlands have transformed the landscape and life has returned.

Maybe there is hope. Just as our opinions about trees, loons and wolves have changed from only a few generations ago, perhaps we are at the shift in our attitudes towards wetlands.  Maybe we’re getting smarter. Maybe in a world that is getting more crowded it’s just easier to appreciate the values of wetlands. No longer wastelands, wetlands are places of birds and fish, places that purify water, places that support local the economy by attracting bird watches and keeping beaches cleaner.

Wetlands are places of wonder.

The 2014 Great Lakes Wetlands Day will be held on February 4, 2014 at the Radisson Hotel Toronto East located in Toronto, Ontario.