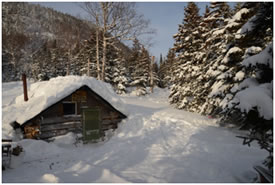 Cabin at the Grassy Place, NL (Photo by John Gosse)

It was a brutally cold and stormy day when local Nature Conservancy of Canada (NCC) steward Mike Targett and friend, Eddie Dempsey, escorted me to the upper reaches of Robinson’s River in western Newfoundland. The hour-long snowmobile trip was arduous and it was a challenge to keep my machine moving forward in the deep, powdery snow.

Eventually, Mike hopped off of his ski-doo and exclaimed with a grin on his face, "We’re here." I glanced around, scratched my head a couple of times and looked at Mike with a puzzled look. "We are? Where’s the cabin?" Mike laughed and pointed at the top of the stovepipe that was sticking out from the snow — the only evidence of the tiny log cabin that was buried beneath eight feet of snow! After some hurried digging we lit the wood stove, unloaded our supplies and settled in to my new home for the next several weeks.

Field work had started, and with it the joy of new experiences and adventures with great people. I was here on behalf of NCC to determine whether Newfoundland marten (a genetically distinct population of the more widespread American marten) occurred within the NCC property locally known as “The Grasses.” Marten are one of only 13 mammals that are native to the island of Newfoundland and are listed as threatened under both federal and provincial species at risk legislation.

There had been some indication from previous tracking surveys that marten may be present in this conservation area, though the extent of where they occurred and their relative abundance was unknown. My job, with logistical help from Mike, his wife Susan and Eddie, was to confirm whether marten indeed lived in the valley and to estimate how many animals may in fact call this area home. 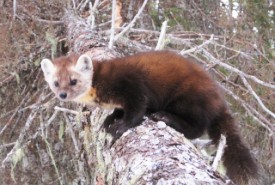 Marten are part of the mustelid (or weasel) family and have dark brown fur with a distinctive orange patch on the throat and upper chest. They are long and slender, which enables them to pursue small mammals, hares, and other small prey in tight quarters.

The approach generally used to determine the presence or absence of marten these days is dramatically different than the approach used by researchers in days gone by. In the past, marten were live-trapped in a wire cage and were physically handled to determine the age, sex, and general condition of the animal. This approach, though necessary for some studies where radio-collars need to be attached, is somewhat intrusive to the animal and requires much more effort and specialized training. 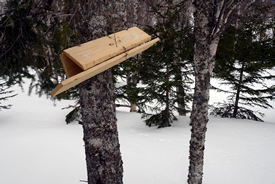 Nowadays, similar information on the occurrence of marten and an estimate of their density (i.e. number of animals/area) can be obtained by collecting a sample of their fur and analyzing the DNA in a laboratory. Hair samples are collected in a simple and inexpensive wooden trap that is lined with sticky glue paper on the interior and is baited with a smelly concoction of sardines and skunk oil.  Marten are notoriously curious and have a keen sense of smell.

Once they detect this irresistible aroma all will-power is out the window and they squeeze themselves into the trap and leave behind a small sample of their fur. After the bait is devoured they’re free to move on their way in search of another meal. The huge advantage of this non-invasive trapping design is that it offers an opportunity for citizen scientists to become involved and add to the collective understanding of where this elusive animal occurs on the landscape. 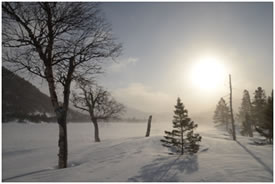 After a strenuous day of snowshoeing through the forest and setting out the traps the waiting game was on. Traps are only checked every four days so this afforded me the time to tend to camp chores and to hike around the stunningly beautiful country of The Grasses. Though the slopes of the river valley were heavily forested at lower elevations, a 45-minute hike to the hilltops revealed an equally impressive landscape where only the hardiest of animals like caribou and rock ptarmigan can eke out a living. The winds in this environment made it difficult to even stand and provided an immediate explanation of why the vegetation was less than several centimetres in height! 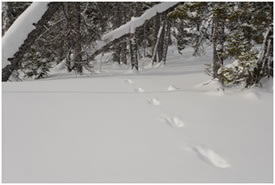 Finally, after several days of anticipation it was time to check the trapline. The presence of marten can also be determined by looking for their signature tracks in the snow. However, I was unsure if this would be possible since the wind had been constantly howling, and all tracks, including my own, were wiped clean within minutes.

Trap 1 — nothing. Trap 2 — some evidence that a red squirrel had been around and devoured some spruce cones on top of the trap. Trap 3 — just fresh snowshoe hare tracks that had been investigated by an inquisitive and undoubtedly hungry fox.

At trap 4, just when my optimism was starting to fade, I found the tell-tale imprint of a marten that had evidently detected the pungent scent and was homing in on the trap. I did an immediate fist pump and a very awkward jump in the air as I had forgotten about the snowshoes I was wearing!

On closer inspection it was clear that the animal had entered the trap and a look inside revealed a small patch of "guard hair" that would later be sent to the lab at Memorial University. This sample turned out to be the first of many and by the end of the trapping session, all 10 traps had been visited by marten during the course of the fieldwork.

In fact, one particular animal became somewhat of a companion and visited the log cabin on a daily basis. In retrospect this wasn’t entirely surprising since he/she had evidently found my stash of frozen moose meat that I thought I was securely buried in the snow next to the cabin! 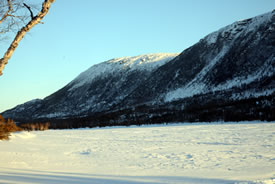 Several weeks later I was contacted by folks at the lab who informed me that a number individuals were identified from the hair samples I collected. This was great news, as it confirmed that marten are well established within the study area, and more importantly, that marten occur further southwest on the Island of Newfoundland than was previously known.

Spring is finally returning to Newfoundland. As I sit back and reflect upon my winter trip to The Grasses, I realize how fortunate I’ve been to have spent time in such a majestic place, and to have shared this experience with friends that are so passionate about conserving the integrity of this property for future generations, and of course, the Newfoundland marten. 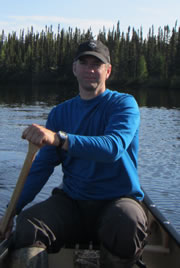 John Gosse John Gosse is a wildlife biologist with more than 20 years of experience in the resource conservation field.