Growing the idea to connect Canadians to nature 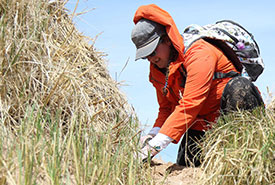 Every so often, a big idea emerges from a smaller one and, in the Nature Conservancy of Canada’s (NCC’s) case, it can turn into something larger than imagined.

This is exactly what happened for NCC’s Conservation Volunteers (CV), a program that originated in the organization’s Ontario region that is now connecting Canadians to nature, coast to coast.

Volunteering has been a quintessential aspect of NCC's work since its inception in 1962; however, its first formal volunteer program was established in 2001. Referred to as "Volunteer for Nature," NCC established a partnership with Ontario Nature (then known as the Federation of Ontario Naturalists) to create opportunities to connect volunteers with important hands-on actions to support important habitats and the species depending upon them. 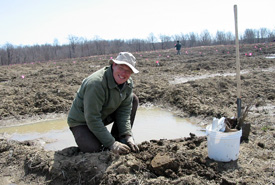 “We created Volunteer for Nature so people could personally learn about the ecology and locations [of NCC properties] and some of the specific techniques we were using to do restoration work, but also to meet like-minded people and to see parts of the province they had never seen before,” says Lisa McLaughlin, NCC’s acting vice president of conservation. 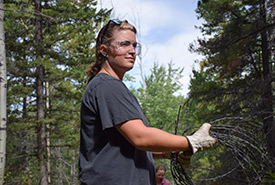 Volunteer at Swann CV event in Alberta (Photo by NCC)

But it wasn’t until a generous grant from the J. W. McConnell Family Foundation in 2005 that the program really took off.

“That funding was instrumental in getting the program off the ground,” says McLaughlin. “Without the grant, we would not have been able to successfully expand the program at the pace we did.”

Volunteer for Nature expanded westward in 2006, first to Alberta, and eventually became Conservation Volunteers, a program now available to nature enthusiasts all over Canada.

The early days of CV saw Canadians from across the country working toward conservation, with a goal of 500 volunteers annually. Now, there are more than 3,000 people joining events from coast to coast and that, according to McLaughlin, “is nowhere near to meeting the demand for hands-on conservation experiences.” 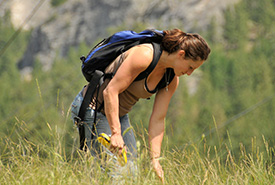 “This program provides volunteers with the tools, guidance and support to come out and learn about nature in a way that they can fit into their lives and be really fun,” she says. “I think that’s why there is even more appetite for this kind of work across the country.”

Over the course of her career at NCC, McLaughlin has seen the CV program grow and develop thanks to support from various donors and supporters. She and other NCC staff worked together to identify how to effectively grow the program to ensure its success in each respective region. The grant not only helped the prosperity of the CV program, but aided McLaughlin in developing other ideas and programs within NCC.

“It expressly taught us how to make change in the organization, how to make change that would last and how to identify opportunities and barriers so that when you’re taking an idea and disseminating it to a new place, you’re aware and conscious of how to make something successful,” she says. “Those lessons don’t just apply to the Conservation Volunteers program. Those lessons, for all of us managers that were involved in that program at the time, helped us be better conservationists.”