Hibernation with a hiss 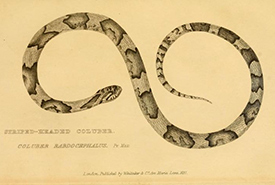 A drawing of a snake (Photo by Darwin Online)

Snakes are such misunderstood creatures. Many people fear them, but that might be because they don’t know how awesome snakes are! Snakes are limbless reptiles with scaly skin. They are very diverse, with different sizes, colours and habitats. Canada is home to over 50 species and subspecies of snakes, and they are mostly found in southern Canada, where temperatures are warmer.

All snakes are carnivorous and swallow their prey whole. However, contrary to popular belief, snakes are timid animals and are aggressive only when threatened. They would rather slither away than strike and bite. Unless you happen to be a rodent or other small animal at meal time, you have nothing to worry about.

Another interesting characteristic that applies to all reptiles is that snakes are cold-blooded. This means that they rely on external temperatures to warm up and regulate their metabolic activities. Now, hold on a second…How do Canada's snakes survive our winter? By hibernation, of course.

By definition, hibernation decreases the metabolic rate of an organism over a prolonged period of time. It’s commonly observed by some mammals, such as woodchucks, in winter.

Technically, snakes don't hibernate, but survive winter through a process called brumation. When in brumation, snakes don’t take a deep, prolonged nap. They are awake but at a low consciousness. Their bodily functions happen in slow motion to conserve maximum energy. Snakes will barely eat, let alone drink, until a rise in temperature presents itself. This rise prompts the snake to move out of its den and into the warmth. Once freezing temperatures hit for good, however, it’s time to stay in the den until springtime.

The scientific term for a den that is used by any animal for a period of dormancy is called a hibernaculum. Snake hibernacula are quite diverse, since different species have different preferences. Some snakes remain solitary while in their den, while others, notably some gartersnakes (which we’ll get to below), prefer to overwinter in groups. Depending on what's available, snakes may use caves, crevices, rocky hillsides, tree hollows, burrows and abandoned mammal dens. 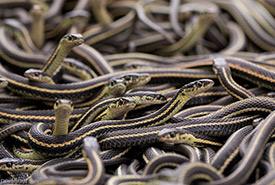 Now…back to gartersnakes. Gartersnakes are the most common snake species in Canada. They’re found from east to west (except Newfoundland and Labrador) and all the way up to parts of the Northwest Territories. What’s spectacular about these serpents is how they can gather in large numbers at their hibernaculum and migrate to the same spot every year! Canada's largest gathering of red-sided garter snakes is in Manitoba, specifically in the Narcisse Snake Dens. If you’re planning a road trip here in fall or spring, you can view the thousands of red-sided gartersnakes emerging to bask in the afternoon sun.

So there you have it: how snakes survive Canadian winters. Hopefully after reading this, you’ll like snakes a wee bit more!