Hide and seek in the city: Exploring Toronto's plants...with my phone 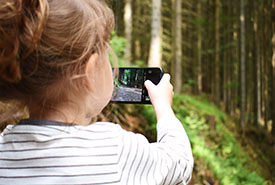 Using a smartphone to identify nature (Photo by Pixabay)

Having been on the Nature Conservancy of Canada’s (NCC’s) editorial team for a few years, I’ve read countless stories from field staff and guest bloggers of various expertise. My job has nurtured my curiosity for animals and made me the hobbyist birder that I am today.

When it comes to trees, though, I can’t identify any beyond sugar maple and birch. When I take my toddlers out for walks on easy trails, I would love to expand my vocabulary from just “tree,” even though I have the advantage of their limited comprehension for complex names.

But I really don’t have time to study manuals and tree guides. So I use Seek, an app by iNaturalist recommended to me by NCC’s senior conservation biologist.

The app’s simple interface lets you browse nearby species and learn about them. You can also snap a photo of the species in question, and even before hitting the shutter button, the app analyzes the image and tries to identify the subject in real-time.

Once a species is identified, the app gives a page of quick facts, including a range map, taxonomy, the number of observations locally and worldwide, and more. It’s designed to be kid-safe, family-friendly and fun. And the more observations you make, the more achievement badges you earn.

Here are a few of the species I learned about around the concrete jungle of mid-town Toronto, where NCC’s head office is located. 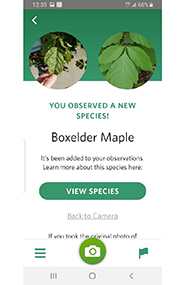 My first test subject was a scrawny and diseased-looking tree, far away from any other hints of nature, on the edge of a lot of a demolished building. I pulled a leaf in closer to my phone for the shot. To my surprise, the app identified it right away, even with my hand in the foreground. It turned out to be a boxelder maple, also known as Manitoba maple, a native species in North America. It features compound leaves with three to seven leaflets that are slightly serrated on the edges.

On another day while walking to the office, I paused to photograph the bark of an evergreen tree. The app could not identify it, but suggested it might be a member of the dicots class. This extremely broad result was not helpful, as dicots mean one of two groups of flowering plants. It prompted me to take a better photo. I snapped a picture of the pine needles instead and turns out I was looking at a blue spruce. 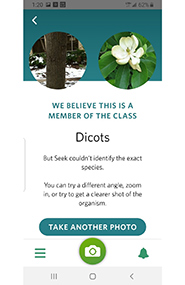 I was on a mission to learn more names, but it was surprisingly hard to get the complete identification down to the species. The next few plants were all non-native to Canada. I even scored an invasive tree.

The ornamental plants in roadside planters that I came across included common box, common yew, callery pear and Chinese arborvitae. Finally, I encountered something I recognized in reading NCC stories: common buckthorn, a small shrub native to Eurasia and one of the species NCC tackles in Conservation Volunteers events.

A species of oak keeps escaping the app’s identification, but I’m determined to find an answer. I also couldn’t believe how many non-native plants surround us in the city, and I wished more of the greenery was native.

Back at the office, I took a picture of a plant that my colleague inherited from our supervisor. We know it as "Benjamin tree," but it never occurred to me that that was the common species name. Seek identified it as a weeping fig, another common name for Benjamin fig. This plant is native to Asia and Australia and commonly sold in stores as ficus. Well, there’s one office mystery solved. 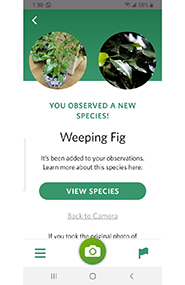 Overall, the app is fairly accurate when there are multiple identifying features in the photo, such as a leaf, fruit and stem. The usefulness of the app in identifying deciduous trees that have lost all their leaves, such as in winter, remains to be seen. 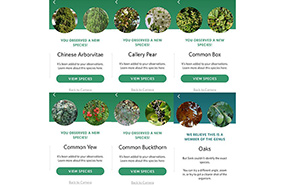 It’s a good idea to supplement your findings with tree guides that have a description of the bark, like this one for Ontario species. I am still grateful for technology that has made nature literacy more accessible for a generation that consumes information electronically. I can now, with a quiet confidence, tell my girls that mama has a few more tree names under her belt. I will be sure to “seek” more plants out on the next outdoor family adventure.