Himalayan blackberry and English holly and Japanese knotweed…oh my! 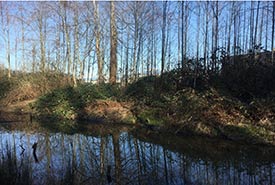 As part of my bachelor’s degree at the University of British Columbia, I had the honour of doing an independent research project with the Nature Conservancy of Canada (NCC). For the project, I mapped all occurrences of invasive species at NCC’s Centre Creek property in Surrey, BC.

This experience was very useful for me. I applied classroom-based knowledge in the field and learned new field skills, such as plant identification, mapping with software and field surveying. I then compiled my findings into an invasives management report to guide future stewardship actions for the Centre Creek property. After finishing my mapping and gaining an appreciation for the prevalence and ability of invasive species to rapidly overtake an area, it only made sense to organize an invasive species removal event on the property. 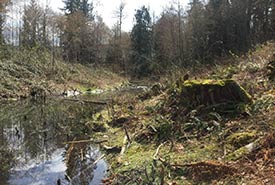 For my weed pull event, I focused on an area identified in the management strategy to be of high concern: a portion along the widest section of Centre Creek that runs through NCC’s property. While mapping this area, I saw a variety of waterfowl and even a heron using the creek. This showed that this is important habitat that can support diverse species if it is protected and restored through the removal of invasive species.

The weed removal took place on March 30. It could not have been a better day to be outside at the end of March, and it was made better by the three awesome volunteers who helped with the removal. The portion of the creek we focused on had low to medium coverage of invasive Himalayan blackberry scattered throughout. Himalayan blackberry is a very prolific species. The species produces 7,000 to 13,000 seeds per square metre and creates dense thickets that can overpower and outcompete native species. Himalayan blackberry can be removed manually through pruning and digging when the plant is at low to medium density. 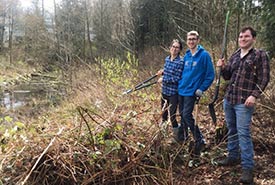 Invasive species can regrow from any plant matter left behind, whether that's above-ground plant mass or root mass. As a result, it is vital that all parts of the plant are removed, to have a lasting impact. Armed with pruners and shovels, the team was up for the challenge of clipping the Himalayan blackberry canes and digging up their roots. 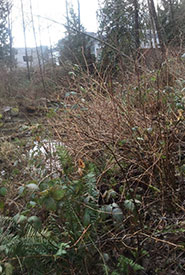 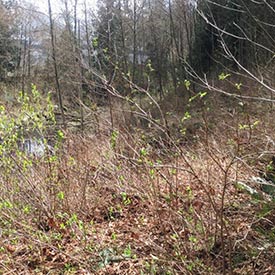 Left: Before. Right: After. After the removal of the Himalayan blackberry, there was space for native species, such as salmonberry, to flourish. (Photos by Lynn Pinnell)

We had a highly productive and rewarding day in the field, spending three hours digging, cutting and piling the Himalayan blackberry. Immediately after removing a patch, we could see more of the native species, with ferns and salmonberry now free from the dominating blackberry.

It was personally satisfying to be able to be a part of the removal of the invasive species that I had mapped. Not only had I gathered information and planned management and improvement steps by developing an invasive species management strategy for Centre Creek, but I played a physical role in improving the habitat's quality. 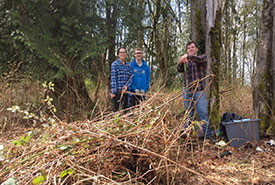 As one of my volunteers said, “We can’t stop. There is more blackberry!” There was truth to his statement, as our efforts were a drop in the bucket in terms of the invasive species removal necessary at Centre Creek. Every little bit can have huge impacts for the species that live there.

I would strongly urge everyone to take part in an invasive species removal event. Invasive species are a widespread problem. Globally, they are the second leading cause of biodiversity loss. All it takes is a little bit of time and energy, and we can make a huge impact to the wonderful environment that surrounds us. 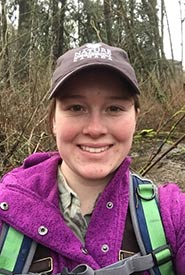 Lynn Pinnell is a student with the University of British Columbia.