Being a Bird in North America: Q&A with Robert Alvo

Robert Alvo, author of Being a Bird in North America (Photo courtesy of Robert Alvo)

From common loons to trumpeter swans, birds have long captivated the fascination of people of all ages. Being a land blessed with a vast and varied landscape, Canada provides habitat to nearly 700 species of birds. Whether you’ve come to know some of these species through personal interactions, such as birding or co-existing with them, or whether you study them, each encounter adds to the appreciation of nature and wildlife.

Robert Alvo, long-time conservation biologist and supporter of the Nature Conservancy of Canada (NCC), has recently published a book called Being a Bird in North America (BABINA). The book is a unique combination of science and humour and provides an introduction to the most interesting characteristics of each species.

Read my conversation with Robert about his first book:

Wendy Ho (WH): Tell me about your background, and why you decided to go into publishing at this point in your career?

Robert Alvo (RA): I’ve been a conservation biologist my entire career, after graduating from Queen’s University with my bachelor’s and from Trent University with my master’s in 1985. I’ve always had a desire to “capture” species, and this practice has been transforming over the decades.

As a young teenager in Greece, I was shooting things, including birds, but I came to feel badly and sold the pellet rifle. I used the money to buy a pair of binoculars and a field guide to the birds of Europe, at which point I turned to identifying and photographing birds. Later, I studied individual species, such as the common loon, black tern and canvasback. I went on to rank vertebrate species of conservation concern in Quebec, then later for all of Canada, and I wrote eight national species status (Committee on the Status of Endangered Wildlife in Canada) reports. BABINA represents my latest phase of capturing species. It’s a new way of reaching the public regarding the importance of conservation.

WH: What makes this book different from other books about birds? 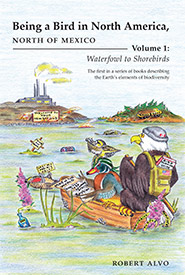 Being a Bird in North America (Photo courtesy of Robert Alvo)

RA: The BABINA approach is a unique way of presenting species, particularly because of the use of cartoons (from 15 artists with their own distinctive styles). Also, BABINA is only the second book I know that gives global distribution maps of all North American birds. Conservation status ranks are presented for each species at the global scale, and at the national scale for Canada, the U.S. and Mexico. Provincial/state ranks using the same ranking system are available from Canadian Conservation Data Centres (for example, Saskatchewan Conservation Data Centre) and the U.S. Natural Heritage Programs. BABINA also features quotations from the days when people could write beautifully by taking full advantage of the rich English language without having to worry about limited space — the kind of writing that gave the reader memorable images.

WH: Who would benefit from reading this book?

RA: Anyone from 12 years old up to adults who wants to know how nature works, and how it has trouble working at times because of human activities. Also, anyone interested in birds who wants to know more than simply how to identify species.

WH: Is there a bird or birds you feel particularly connected to? Why?

RA: Definitely the common loon. I studied the effects of lake acidification on common loons for 25 years, and am currently partnering with professor Mark Mallory at Acadia University and Doug Tozer at Bird Studies Canada to mentor a master’s student who will repeat and further the study. If all goes well, 2018 and 2019 will be years 37 and 38 of this long-term study.

WH: What kind of message or lesson do you hope your readers will learn after reading your book?

RA: Each species page is a lesson on the most interesting aspects of the species, and also a lesson on one or more human-related or ecological issues.

WH: What are your plans for future volumes?

I will produce a children’s version of BABINA, then a BABINA-like book on all of Earth’s life forms. Things are changing quickly in the natural world, and I feel it is important that people learn to love and protect all the elements of biodiversity, not just birds. Afterward, I will do volumes two and three of BABINA.

As a thanks to NCC's Quebec region for promoting his book, Robert has donated an advertisement page in BABINA to NCC.