January roundup: Conservation and nature stories from around the world that caught our eye this month 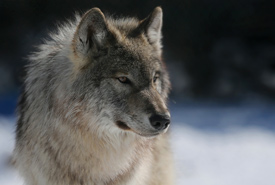 Every day, countless inspiring and informative stories are published about conservation successes or discoveries in nature and wildlife around the world. Here are some that caught our attention in January 2019.

Researchers from the University of Alberta have determined that during periods of snowfall, Canadian grey wolves often hunker down and ride out the storm.

Curl up with the story >

Pumas get the red light

Scientists and ranchers in Chile are using flashing lights to deter pumas from predating on llama and alpaca herds.

Flash onto the story >

Standing guard over the turtles

After years of intense poaching, female elephants across Africa are adapting to genetic pressures by losing their tusks.

Previously believed to be the last of his species, “the world’s loneliest frog” now has five other frogs joining him from the Bolivian cloud forest.

As fewer monarchs are making it to their wintering grounds in Mexico every year, a new study suggests that they are finding new places to overwinter, but where?

A global study shows that permafrost throughout the Arctic is thawing at an alarming rate, causing landscape-wide changes and further contributing to climate change.

Thaw out the story >

A recent study shows that the U.S. Endangered Species Act and similar legislations are having a positive impact on the health of endangered species populations.

The Nature Conservancy of Canada's Dan Kraus gathers together 10 success stories from 2018 that give us hope for wildlife and environmental conservation around the world.