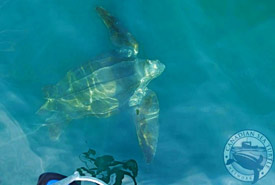 When most of us think of turtles, we think of the little painted turtles that can be seen bathing in the sun’s rays on a summer afternoon on the edge of a pond or lake. Many may not be aware that here in Nova Scotia we have a frequent visitor to our waters in the Atlantic that can grow to the size of a picnic table and hasn't changed much for some 90 million years. 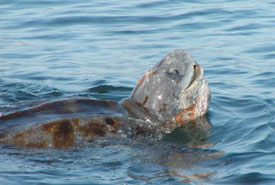 Pretty sure I spotted a dinosaur today! Why doesn't anyone believe me? (Photo by Scott Benson, NOAA)

The leatherback turtle resembles an ancient dinosaur. Its overall size might be the first indication that this creature is better suited for its natural environment, and then you have the distinctive shell. Unlike many other sea turtles, the leatherback’s shell (or carapace) is made up of individual bony plates and covered with a thick layer of fat and leathery protective skin. 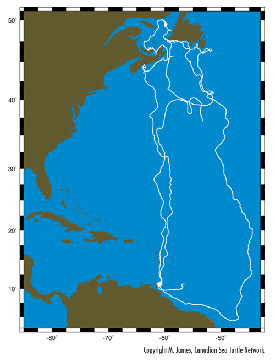 Talk about a workout - 12,000 km swim for their Jellyfish buffet. (Photo by Canadian Sea Turtle Network)

Despite the leatherback's monstrous size (world's largest reptile at six feet long and weighing as much as 2,000 lbs) they are incredible swimmers. You would have to be, to safely complete the 12,000-kilometre round trip they undertake every year. While they nest on the beaches of Trinidad, Mexico, Costa Rica, St. Croix and the Virgin Islands, during the summer months they travel to the cooler waters of the Atlantic to feed on soft-bodied prey, most notably jellyfish — their absolute favorite seafood dish. The waters off the coasts of Atlantic Canada support a large number of these jellylike creatures, and therefore we welcome one of the largest seasonal leatherback populations in all the Atlantic Ocean.

Although leatherbacks are both strong swimmers and remarkable navigators, they are in constant danger during their long journey and during the feeding season. The turtles can become entangled in fishing gear or hit by passing boats. They can also be threatened by offshore resource extraction activities.

The Canadian Sea Turtle Network is a non-profit organization made up of marine biologists, fishermen and community members who study this majestic animal to better understand its behaviour. Their work aims to help conserve these endangered turtles through better practices. 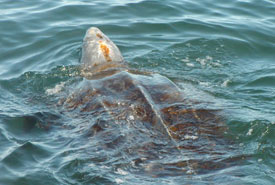 What's on today's menu? Jellyfish - I like mine with a dash of salt. (Photo by Scott Benson, NOAA)

Since the organization has partnered with local fisherman and those who know the surrounding waters, they have had much success in releasing entangled turtles from fishing nets before they succumb to any real danger. By working together the partners can establish ways to keep these sea turtles safe from harm. Hopefully, their numbers will increase in the near future.

The fishermen involved in the project are now choosing areas to fish that may not be frequented by the turtles. The organization provides education and instruction so if an incident of entanglement does occur, the fishermen have the knowledge and know how to release the animal from their nets without causing any harm to the animal. 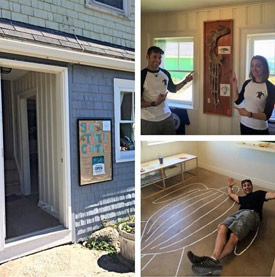 Hope for a majestic creature

Having survived for millions of years and swimming tens of thousands of kilometres each year just for a bite to eat, the least we can do is create measures to keep this majestic reptile from being added to the extinction list.

To learn more about their epic journey or these efforts, visit the Canadian Sea Turtle Network. 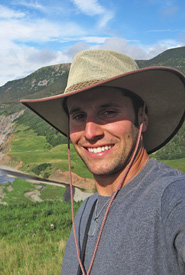