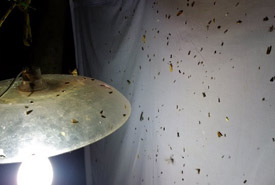 Moth surveying equipment and it looks like it’s working! (Photo by NCC)

Finding a summer job can be stressful for college and university students. Luckily, I got the amazing opportunity to work with the Nature Conservancy of Canada (NCC) this summer as a conservation technician. So amazing, actually, that I didn’t mind staying late after work at all!

During my two months working at NCC I took part in some really interesting projects. One of my favourite and first major projects I helped out with involved surveying moths. As a graduate of Fleming College’s Fish and Wildlife Technician program, I’m fairly knowledgeable when it comes to most wildlife. However, insects were a whole different story.

I had no idea what to expect when we set out that evening to the site, located at one of the NCC properties in Norfolk. I was picturing running around with flashlights, butterfly nets and field guides. Honestly my prediction wasn’t far off!

That evening it was myself, one of my co-workers, Liv Monck-Whipp, and two local biologists, Peter Carson and Mary Gartshore. Peter and Mary work with NCC frequently and are both experts when it comes to local wildlife. They had all of the equipment we needed to prepare for the monitoring that night.

We started out by stringing rope and white bedsheets between trees at the edge of the forest that runs along the edge of a restored field. Then came the lights — huge mercury bulbs in fixtures we used to attract the moths — and the generator. The moths would be attracted by the lights and would land on the bedsheets strung between the trees. The white sheets allow for easy observation of species and sheer numbers.

We also set out homemade moth traps, which are made from a five-gallon pail with a funnel in it. A special UV lightbulb hooked up to a battery is put in a frame above it to attract the moths. When they land near the bulb, they drop down through the funnel and land in the bucket filled with egg cartons for them to hide in and sleep.

After everything was all set up, the only thing left to do was wait for the darkness to close in. 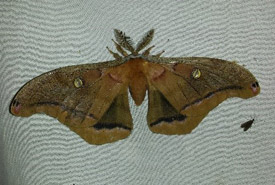 It started slowly at first. I watched and saw as a few small moths came fluttering in. Not even an hour later, we were getting swarmed! Moths were coming in from all directions and some of them were huge! Among the most notable goliaths were the silk moths. These beauties have a wingspan as long as your hand and have amazing markings that look like owl eyes on their wings.

That night, I learned how to identify many different species, such as slug moths, cabbage whites, bean moths and a few others. However, hands down my favourite family of moths has to be the sphinxes. Sphinx or hawk moths are a family of moths that are known for their hummingbird-like feeding behaviour. 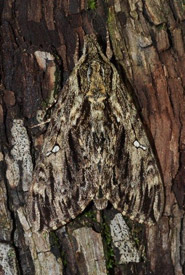 At one point Mary and I witnessed something feeding on some nearby soapwort (also known as bouncing-bet) and we saw it was a sphinx moth. That soon turned into a game of hide and seek, with both of us trying to catch up to it in time to get a photo to try and identify it.

I discovered hat my night vision is pretty good when it comes to tracking fast-moving moths. We finally managed to get a good photo, and to our surprise it turned out to be a hermit sphinx — a rare species!

As the night progressed, we photographed and recorded more species, some of which we collected in vials for identification at a later time. We spent time going back and forth between the two sheets and checked on the traps. 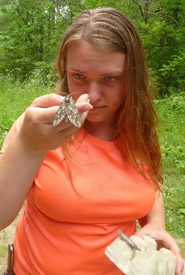 The next day we returned to help Peter and Mary go through the traps and collect some of the individuals. As we opened the traps, moths flew out in every direction, although many remained. For some reason the sphinx moths would always fly out and decide I looked like a good place to land. Needless to say I didn’t mind at all!

Reflecting on my internship experience

My time working for NCC is an experience I will remember forever. As an NCC intern, you get to do something different every day, so you never have to worry about getting stuck in the same boring routine.

Common mullein is a biennial plant introduced from Europe and was used as a garden plant. The plants of this species can grow up to two metres tall and are distinguished by their yellow flower heads and hairy leaves.

Being a conservation technician isn’t all fun and games, though; it’s not all species inventory or moth surveying. Sometimes you have to go out and remove invasive species (I can officially call myself the Mullein Removal Queen), install heavy signs and lots of other tough, sweaty work. You come home some nights covered in showy-tick trefoil seeds and you might find even find a tick or two.

But that’s a price I’m willing to pay if it means I get to spend every day doing something that is making a difference; something I love. 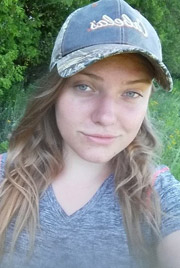 Gina Aicken is a former conservation technician intern with the Nature Conservancy of Canada for the summer of 2016.