Listening for the yellow rail 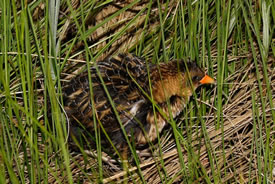 The Alberta Biodiversity Monitoring Institute (ABMI) surveys biodiversity across the province of Alberta. From the grasslands and parklands of the south to the boreal in the north, we record the terrestrial and wetland species present, gather soil and water samples and measure a variety of habitat characteristics. We also determine how our human footprint is changing over time, to identify relationships between human land use, habitat and species abundance where they exist.

But how do you monitor a species that is only active at night, lives in difficult-to-access wetlands and exists in low numbers across the landscape? In the case of the elusive marsh bird, the yellow rail, it’s best known for being unknown! This is the challenge facing the ABMI’s Rare Animals Project*, an initiative at the leading edge of acoustic monitoring technology led by Erin Bayne at the University of Alberta.

That may be the key: monitoring this reclusive bird species acoustically may offer scientists their best chance at discovering where this bird lives, and thus what habitats need to be protected to conserve it.

The yellow rail (Coturnicops noveboracensis) is listed as a species of special concern in Canada, meaning it could become threatened or endangered because of biological characteristics of the species itself, identified threats to the species, or both. Yellow rails are designated as a species of special concern largely because so little is known about this secretive bird. Traditional bird surveys don’t effectively capture their status, because they are nocturnal and exist at such a low density.

That’s where automatic recordings units, or ARUs, come in. Weighing between three and seven pounds and able to record in temperatures ranging from below zero to +50 degrees Celsius, these recorders are mounted on trees or other sturdy posts and can be programmed to record at set time intervals from weeks to months — even up to a year — in a variety of different, often remote, habitats.

The advantages of using ARUs are enormous: because they can be left in the field for extended periods and can be programmed to record anytime, monitoring using ARUs provide better estimates of just how many species are out there than do traditional surveys. They can also record huge amounts of data (25 terabytes in one field season alone — that’s two and a half years of continuous sound files!). ARUs facilitate more accurate species identification than relying exclusively on human interpretation. With a permanent sound recording in hand, experts can verify species IDs, which decreases potential errors in identification by observers and the stress of accurately recognizing calls in the field.  ARUs also reduce safety and logistical concerns associated with traditional survey methods. And ARUs offer the possibility of computer-based processing: automated song recognition analysis has been developed for yellow rails, so that recordings can be searched for “hits” of this target species.

All of these benefits make a big difference when trying to understand how many yellow rails are in an area, and what kind of habitat they prefer. Because of this versatility, the ABMI’s Rare Animals Project has been using ARUs to survey a wide variety of potential yellow rail habitats in the Lower Athabasca region since 2012, with the goal of improving our understanding of yellow rail conservation status in Alberta.

Yellow rails make a distinct noise — similar to stones tapping together — so their vocalizations are easy to recognize. The research team first identified several sites where yellow rails had previously been detected and were able to use that data to determine wetland types where yellow rails would likely be found. The analysis revealed that the species prefers graminoid fens and meadow marshes with a water depth between 0 and 20 centimetres.

Using this information, the team deployed ARUs in similar habitats. With the aid of automatic song recognition, 60 new yellow rail locations were identified in 2013 alone. That’s more detections in one year than in the past 15 years of monitoring! And, because ARUs record all other vocalizing species in the area simultaneously, the project collected data on other species that occupy the same habitat, such as sedge wren.

The yellow rail remains an elusive bird to monitor, but thanks to these advances in acoustic technology, we’re getting closer to understanding the biology of this rare species and the habitat it calls home. The ABMI is hot on the trail of the yellow rail!

* The ABMI’s Rare Animals Project was originally conceived and initiated through the Ecological Monitoring Committee for the Lower Athabasca (EMCLA). The EMCLA, a joint government and industry program coordinated by the ABMI, was established in 2010 with the goal of designing protocols to monitor rare and elusive species. 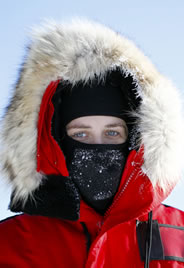 Lindsay Monk is the northern communications advisor for the Alberta Biodiversity Monitoring Institute.