Look to the sky and feel the wonder: Gillies Grove, Arnprior 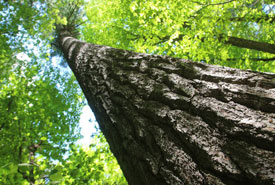 "It’s a reverential place," I whisper to my companion. "You seem to leave the outside world behind when you step onto the path."

He agrees. "It reminds me of when the Pevensie children stepped through the wardrobe into Narnia."

Dense forests, Canada’s First Nations people and abundant wildlife greeted French explorer Samuel de Champlain when he ventured into central Canada in 1613. The French explorer had crossed the sea to the New World, then turned his sights on the daunting St. Lawrence River. This massive waterway would lead him into the heart of Canada. Halting at the turbulent rapids at Lachine, the adventurers traded their ship for canoes and set off into the unknown.

Algonquin guides led Champlain and a number of his crew westward along the Ottawa River — a landmine of rocks, rapids and shoals. For the French explorers, the view must surely have been awe-inspiring. Dense virgin forest grew on either side of the fast-flowing Ottawa River. Sugar maples, yellow birch, American beech, eastern hemlock and basswood stretched as far as the eye could see. All were dwarfed by magnificent stands of the eastern white pine. One of the tallest species of tree in Canada, a mature white pine can tower taller than 50 metres.

Fast forward now to 1823. Scottish-born land developer Archibald McNab had petitioned the Canadian government to grant him land along the Ottawa River west of Ottawa. McNab’s aim was to become wealthy by selling plots to the influx of Scots, English and Irish, who were flocking to Canada at the time. 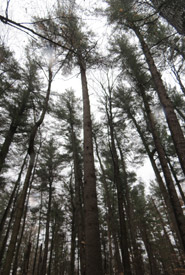 Pines are so high from the ground it is difficult to see their topmost branches. (Photo by Nancy Silcox)

As McNab’s plan went forward, expanses of forest land were cleared for farming. The trees provided raw materials for barns and houses. And soon the forests became a memory.

The eastern white pine had a different fate than homesteaders cabins. It was especially prized in both France and England. With trunks that grew long, straight and strong, the trees provided perfect raw materials for the masts of sailing ships.

And so, the eastern white pine gradually disappeared from the eastern and southern Ontario landscape.

The decimation was halted by lumber magnate Daniel McLachlin, who had acquired an expanse of land outside the town of Arnprior. While most of McLachlin’s purchase was razed for lumber, he preserved 56 acres (22 hectares) for family picnics. When McLachlin went bankrupt, the site was purchased by another lumber king — David Gillies. Gillies prized the land and stated his wish to preserve the forest reserve after his passing. With Gillies death in 1967 and his wife’s in 1980, Gillies Grove was willed to the United Church of Canada. Church administration turned the bequest down and the property went on the market.

In 1986, the property was purchased by the Ottawa-based Roman Catholic Oblates of Mary Immaculate for $100,000. By the early 2000s Gillies Grove was on the market again, with the Oblates declaring the property too expensive to maintain. Arnprior buzzed with rumours that their beloved grove was about to be sold to a developer who would raze the property for building lots.

It’s reported that the howls of protest coming out of Arnprior could be heard as far as neighbouring Pembroke!

It was conservationists to the rescue. Gillies Grove was purchased by the Nature Conservancy of Canada (NCC) in 2001. The organization continues to administer the property with volunteers from the Land Preservation Society of the Ottawa Valley. 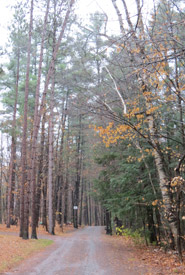 Strolling through Gillies Grove is both a magical and otherworldly experience. (Photo by Nancy Silcox)

Let’s take a leisurely stroll ourselves through the grove. It’s a mere hop-step-and jump from the fast-running Ottawa River. As is customary, we’re accompanied on our National Historic Site adventure with our golden retriever, Hailey. Given the time of year (late fall) and the weather (cool and rainy), we are the only visitors to Gillies Grove. We allow her the privilege of exploring off-leash. Seemingly awed like us by the experience, she stays close. Her nose confirms that there are other species than trees and plants in the grove.

A number of birds — many now rare in populated southern Ontario — lure dedicated bird watchers to the Gillies Grove site. They include the uncommon scarlet tanager, red-shouldered hawks, pileated woodpeckers and barred owls. If you stay long enough and show patience, visitors may be treated to the acrobatics of flying squirrels leaping from tree to tree. Look down too and if you’re sharp-eyed, you may spy red-backed salamanders scurrying along the forest floor.

A dazzling array of plant species changes according to the season. Spring flowers include hepaticas, violets, red and white trilliums. Summer brings white baneberry and the Indian pipe plant.

But today, we’ve come primarily to see the eastern white pine. And we are rewarded. The pines stand shoulder-to-shoulder near the centre of the grove. So high are they that from the ground it is difficult to see their topmost branches.

In May of 2015, NCC announced that the tallest tree in Ontario finds its home in Gillies Grove. Measuring 47 metres (147 feet) high and more than 100 centimetres in breadth, this magnificent giant stands taller than a 13-story building. Estimated to be between 150-200 years old, the pine has been added to Forest Ontario’s Honour Roll as the province’s tallest tree. A bench has been placed beside the gentle giant to invite tree-huggers to rest a spell and look up; look way, way up!

Gillies Grove was honoured as a National Historic Site in 1994.

This blog is reposted with permission from Nancy Silcox's blog: silcoxblog. 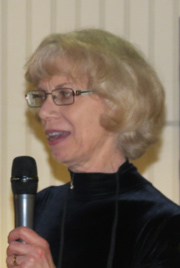 Nancy Silcox is a a freelance journalist living in New Hamburg, Ontario.