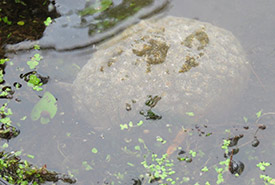 A jelly-like mass submerged in the canal near our garden. (Photo by MaryLin Howard Photography)

It was early October in the beautiful little hamlet of Shrewsbury, Ontario. My husband and I were doing some autumn cleanup in our flower garden, under a large willow tree on the bank of a canal. We noticed that some branches had fallen into the water and we were removing what we could. As we pulled one branch out of the water we saw something we had not seen before and did not recognize.

It was a jelly-like mass clinging to a branch. Was it possibly some type of egg sac or an accumulation of algae? Our curiosity was piqued. As we looked closer into the water, we noticed more masses; some were attached to branches, others floated freely in the water along the shore. Very carefully, we brought them closer and raised them out of the water slightly. How interesting these unknown masses were! Having no idea what we were looking at, I began to do some research. 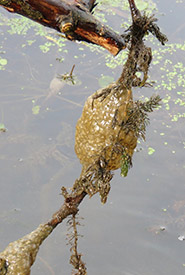 I learned that we had found magnificent bryozoans, an ancient group of filter feeders, a subgroup of animals that feeds by straining food particles from water. These colonies of organisms are formed when hundreds of tiny (approximately 0.5 millimetres each) invertebrates, called zooids, are glued together with a special protein. A translucent mass is formed, with tiny, star-like blooms on its outside. These masses are covered with microscopic filter feeders, such as coral, and consume microorganisms, which help clean the water where they live.

If theses masses are disturbed or if their living conditions become less favourable, they release tiny spores, called statoblasts. These spores, which resemble tiny black dots, drift away to find better conditions and then begin to colonize again. If a statoblast breaks away from a colony, it can reproduce asexually. Colonies can be attached to an object or be free-floating. Most colonies form in spring and die in winter. Because bryozoan zooids are so small, they can disperse gas and nutrients without a respiratory or circulatory system. They do, however, have a nervous system and muscles. 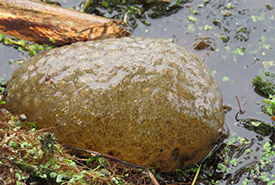 I have come to learn some very interesting facts about bryozoans. They are known by many names, including sea mats, moss animals and lace corals. I’ve learned that an early fossil of a bryozoan colony of zooids dates back approximately 470 million years. As well, as they are a part of the food chain, bryozoans are prey for fish, insects and snails. Interestingly, these colonies also produce a variety of chemical compounds, some of which may be useful in medicine.

There is so much to see and learn if you pause and observe your surroundings in nature. Perhaps one day you too may come across a bryozoan colony or another beautiful mystery of nature. 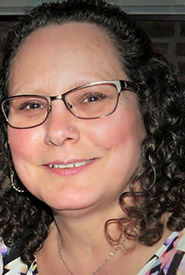 MaryLin Howard is a nature photographer and nature enthusiast.