Making peace with the Scotch pine (I mean, Scots pine) 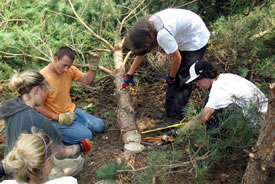 Young volunteers tackling Scotch pine on an NCC reserve, ON (Photo by NCC)

When it comes to Christmas trees, I am a balsam fir man through-and-through. I like the form, the smell and the smooth, soft needles. I also admit that I am not crazy about Scotch pine, a main alternative here in Ontario. You could say we have "issues."

Scotch pine (people in the know call it Scots pine) is native to northern Asia and Europe, including its namesake Scotland. Hardy and tenacious, it was once a tree of choice for the Ontario Christmas tree industry and for re-greening eroded lands and abandoned farms. The problem is Scotch pine just does not stay put. Today it is a weedy and problematic species that spreads like a dandelion and invades many natural areas, particularly grasslands. It is a tree of choice for elimination from protected lands of the Nature Conservancy of Canada (NCC).  And we’re not the only ones. 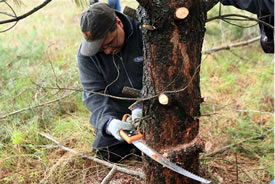 Ecologists have many reasons to turn their backs on this tree, like an invited dinner guest who has overstayed its welcome. But in the spirit of Christmas, I have turned a sympathetic eye to the Scotch pine, this plant out of place. The result is the following email I recently sent to a sister conservation charity in the Highlands of Scotland:

I just registered online to help sponsor the restoration of the Dundreggan Estate in the Scottish Highlands, part of your project to bring back Scotland’s once-great Caledonian forest. I would like to dedicate the donation to a work colleague, Todd Farrell, and there is a wee story behind the donation.

We at the Nature Conservancy of Canada have a parallel mission to yours. In southern Ontario, for example, we are protecting and restoring tracts of the Carolinian forest — a threatened Canadian ecosystem. We are also restoring native tallgrass prairie and oak savannah to a landform known as the Oak Ridges Moraine, in a landscape called the Rice Lake Plains. One way we do this is by cutting the heck out of the non-native Scotch pine. Scotch pine has had its heyday here in Ontario, helping to restore natural cover to cleared, eroded, abandoned farmlands in the mid-1900s. And it remains a popular Christmas tree. But as you are likely aware, it is a hardy fellow that spreads readily and invades natural habitats, to the exclusion of other species. I know you have similar difficulties in your own natural areas, sometimes with North American species. 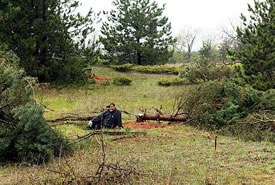 Todd, our conservation biologist in central Ontario, is responsible for managing our nature reserves. He has employed every technique at his disposal to level and remove Scotch pine stands. And he has taken down a lot, I mean a LOT, of Scotch pine. Conservation Volunteers have pulled seedlings and cut small trees with hand saws. There have been teams of chainsaw operators and even mechanized operations involving feller-bunchers, chipping machines and the like. It’s not that Todd hates the Scotch pine (at least I don’t think he does). It’s just that he knows he needs to remove this introduced species to successfully restore the tallgrass ecosystems. I am making this small donation in Todd’s name to help restore a natural Scotch pine forest in its rightful place. Consider it a bit of atonement for our most unfriendly approach to this noble tree.

I have seen Scotch pine in all its natural glory in Scotland and in remnants elsewhere in the UK. They are fine specimens indeed. Your vision to restore the Caledonian forest — to bring back "Scots" pine to at least some of the Highlands — is a laudable effort. So please accept this small contribution to the cause, along with our good wishes for the successful restoration of Scotland’s natural heritage. Maybe someday our grandchildren, retracing some family roots (Todd and I both spill a bit of Scottish blood when nicked during cutting operations) will visit and walk in the shade of the Scotch pine forest you are now rebuilding."

I never thought about it until now, but I bet Charlie Brown’s runt of a Christmas tree was a Scotch pine (okay, okay, a Scots pine). It has a bit of a reputation here for being stunted, spindly and scraggly, partly because we’ve planted it in many places poorly suited to the species. So maybe they’ve got a bit of a bad rap. In the words of the blanketted philosopher Linus Van Pelt:

"I never thought it was such a bad little tree. It's not bad at all, really. Maybe it just needs a little love."

(and maybe the occasional chainsaw...)