March roundup: Conservation and nature stories that caught our eye this month 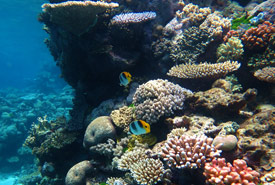 Every day, countless inspiring and informative stories are published about conservation successes or discoveries in nature and wildlife around the world. Here are some that caught our attention in March 2017:

Pollinator: Rise of the drones

A Japanese chemist has modified drones to potentially          pollinate crops.

The Ocean Agency, a non-profit organization, has created a form of Google Street View for the ocean to help scientists with their research and drive awareness of the importance of coral reef conservation.

Mirror, mirror on the wall, who’s the birdiest one of all?

An Australian bird — called the bush stone-curlew — that was caught staring at its reflection at length has rapidly become an internet sensation.

Stare at the story here >

Real-life creatures from the black lagoon

Learn about some bizarre marine animals that can only be seen in the wild during night-time scuba expeditions.

Researchers recently bred a bunch of “Canada-made” parasitic wasps, which they hope will help eliminate the invasive and destructive emerald ash borer.

Buzz to the story here >

With the disappearance of close to 50 per cent of the planet’s coral reefs in the last three decades, scientists are racing to ensure that at least some make it through the next 30 years.

A Royal Ontario Museum exhibit showcases the complete skeleton of a blue whale that washed up on shore in Trout River, Newfoundland and Labrador, three years ago.

Scientists have unearthed fossil evidence in India of red, algae-like plants that lived 1.6 billion years ago; a discovery that suggests that plants may have originated hundreds of millions of years earlier than once thought.