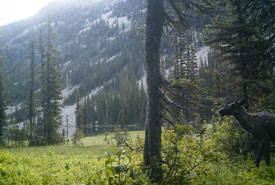 Upon our first in-person meeting, Norm Merz, wildlife biologist for the Kootenai Tribe of Idaho, met us at his office, soaked up to his knees from having already spent the better part of the morning walking through wet meadows. When I spoke previously to Norm over the phone, I could hear his smile as he expressed how much he loves his work.

Not all of the work this biologist does involves morning meadow romps in the field. Saving a species on the brink of extinction involves a great deal of gruelling work out of the field — planning, coordinating people and securing funding.

The story of the South Selkirks mountain caribou herd was the initial inspiration for the Mountain Caribou Initiative. This is the only herd of caribou left that travels back and forth over the Canada-U.S. border. As of April 2017, there were just 11 caribou remaining in the South Selkirks herd. Without emergency measures to reduce the rate at which adults are dying, and increase calf survival rates, we’re at a high risk of losing this herd entirely and permanently. Led, in large part, by Indigenous peoples of this region, planning for a maternity pen (a safe, enclosed area for expecting mothers) for the herd is underway for next spring.

Constructing a maternal pen is expensive and a lot of work, and there’s no promise that it will actually succeed. No one benefits monetarily from trying to stop the extinction of this herd, but the people fighting for these animals are in it for another reason. 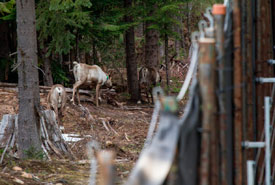 “It’s a matter of the heart,” Norm admits. For members of the Kootenai Tribe and their neighbours — the Kalispel in northeastern Washington — it’s also an issue of cultural identity and survival.

There are a lot of organizations involved in the project, including tribes, First Nations and provincial, state, federal and local governments — all of which have representatives on the Selkirk Caribou International Technical Working Group (SCITWG). This group is tasked with updating the 1994 recovery plan to stop the extirpation of the Southern Selkirks herd. One of the first things agreed upon by the group was that action needs to be taken even while the recovery plan is being updated. Without immediate action, this herd will almost certainly become extinct before the planning process can be completed.

“We’re to the point where we’ve got to try everything we can,” says Norm.

An effort was made to initiate the maternal pen this spring, but weather and project details halted the project. However, things are looking promising for 2018. The pen is currently being constructed. However, the total budget to run the pen is just over US$230,000, most of which has yet to be secured. Without these funds, the project won’t get off the ground.

Based on the most recent survey, there are currently only six cows in this tiny and shrinking herd. The recovery plan sets out to safely capture and transport the cows by helicopter to the 20-acre maternal pen, which will be built on the Nature Conservancy of Canada’s (NCC’s) South Selkirks property, east of Ymir, British Columbia. The cows will be held for three to four months until they give birth, and will be released around mid-July when the calves are about six to eight weeks old. The pen’s 15-foot-high wall serves as both a visual barrier to protect the wildness of the caribou and as a deterrent to predators.

Norm explains that he would love to introduce the South Selkirks herd to caribou from other herds to help with numbers and also with genetic diversity. However, with all of the southern mountain caribou herd populations in poor shape, additional caribou don’t appear to be available for augmentation at this point. At the very least, the SCITWG is hoping that the pen will stabilize the population, as appears to be the case with a North Columbia herd — where maternity penning has been ongoing — if not succeed in increasing calf numbers as has occurred with the penning of the Klinse-za herd in the South Peace region of BC.

View some of the last caribou in the Southern Selkirks herd, captured on NCC’s Darkwoods preserve during the summer of 2016, in the video below: 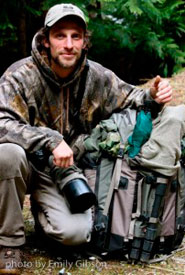 Dave Moskowitz works as a biologist, photographer and outdoor educator.