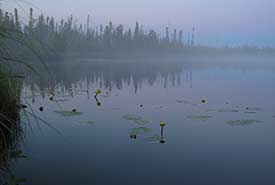 Every day, countless inspiring and informative stories are published about conservation successes or discoveries in nature and wildlife around the world. Here are some that caught our attention in May 2018:

More boreal for the world

On May 15, the Nature Conservancy of Canada, in partnership with the Tallcree Tribal Government, the governments of Alberta and Canada and Syncrude Canada, contributed to creating the largest boreal forest preserve in the world.

It took a team of seven people, including two police officers, to capture a beaver that tried to enter a bar in Waterloo, Ontario.

Sip on the story >

Charlie Russell, an Alberta naturalist who once lived alongside bears, passed away on May 7 at the age of 76.

The hairs of the invasive oak processionary moth caterpillar are causing residents in London, England, to break out in rashes.

Crawl to the story >

Researchers have discovered that the waterwheel plant, an aquatic relative of the Venus flytrap, can close its trap ten times quicker than the flytrap.

Taking conservation into his own hands

A man in India converted a previously barren island into a 1,360-acre forest that provides habitat for rare species, such as tigers, elephants and rhinos.

According to recent research, a fungus that has destroyed many amphibian populations across the planet most likely originated in eastern Asia.

Scientists have discovered a new shrew species on the peak of just one mountain in the Philippines.

Dig into the story >

Invest yourself in the story >