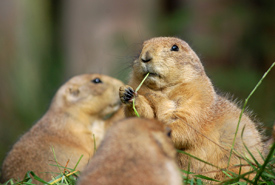 Every day, countless inspiring and informative stories are published about conservation successes or discoveries in nature and wildlife around the world. Here are some that caught our attention in May 2017:

Scientists have attached backpack-like tracking tags on a group of Connecticut warblers to learn more about the species’ migratory trek over the Atlantic Ocean from Manitoba to the Amazon.

Migrate to the story here >

A biologist in Arizona believes that the noises that prairie dogs make should be classified as a language — one that humans may one day comprehend.

Burrow into the story here >

Changing of the bird

Scientists recently reported that common murre parents preen each other’s feathers to determine whose turn it is to look after their chick and who has to search for food.

Switch over to the story here >

Want to hear the latest buzz?

Recent research suggests that some plants might be able to detect the sounds of flowing water or insects buzzing around them.

Despite their best efforts, University of Nottingham researchers can’t seem to find a willing and suitable mate for Jeremy, a snail with a rare genetic disorder that causes its shell to coil left instead of right.

Glide over to the story here >

Plant yourself into the story here >

According to a recent study, a shortage of prey – the same factor that contributed to seven Ice Age feline species’ extinction – is putting the African lion and Sunda clouded leopard at risk of extinction.

Claw into the story here >

Expose yourself to the story here >