Maybe, sparrow, it's not too late 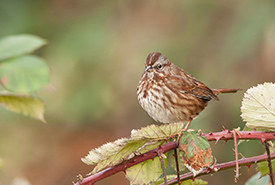 Neko Case is one of my favourite songwriters. Not only is she brilliant and multi-talented and have a stunning voice, she is also a strong advocate for the rights of women, Indigenous Peoples and wildlife. I am also passionate about these three things; so when Case puts it all to music, I’m all ears.

In her song "Maybe Sparrow," Case speaks to a figurative sparrow as if to warn it of its impending demise. But her warning falls on deaf ears. This song is open to interpretation. I think that humankind represents the sparrow, and that the song is saying that we need to pay attention to our actions before we destroy habitats that species, like the sparrow, depend on. Case has a tendency to weave urgency for conservation into many of her songs, but on World Sparrow Day, this one is worth spotlighting.

I used to think of birds, especially small passerine (i.e., perching or song) birds like sparrows, as secondary to the bigger picture of the land and all that it sustains. Small with mostly unexciting plumage, they tend to fall into the background behind flashier birds like blue jay, cardinal or great blue heron.

Working at the Nature Conservancy of Canada (NCC) has changed the way I look at nature and its unsung heroes. I now see all sparrow species as quintessential pieces of Canada’s conservation puzzle.

There are 30 sparrow species that occur in Canada, and each plays an important role within the ecosystems where it lives. Meet some of Canada’s sparrows below. Maybe you too will gain a new perspective on nature. 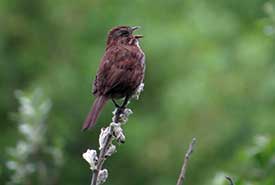 Seeing as I started this blog writing about a song, it seems fitting to first introduce you to the song sparrow.

The song sparrow has one of the most widespread ranges of any songbird in North America. These birds can be found in diverse habitat types from coast to coast, from marshes to forest edges to backyards. They conceal their nests in grass tuft or shrubs, using bark or other vegetation to make the outside of their nest and then lining it with grass, rootlets and animal hair.

Song sparrows are brown with heavy, bold streaking on their white breasts and flanks. Their appearance varies, however, across their wide range, from small pale birds in the deserts of the southwestern U.S., to large, dark birds on Alaska’s Aleutian Islands. 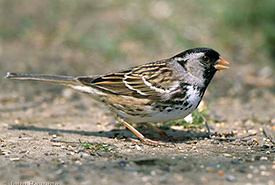 Next up is Harris’s sparrow, Canada’s only endemic breeding songbird. This means that it only breeds in Canada and mainly on the tundra.

A ground-nesting species, its plumage is marked with a black bib, forehead and crown. It also has a small, pink bill and orange legs.

Harris’s sparrow has been assessed by the Committee on the Status of Endangered Wildlife in Canada (COSEWIC) as special concern because of its rapidly declining numbers. This species’ population has been on a steep decline over the last 35 years, including a 16 per cent decline in the last decade. They may be impacted by climate change in their breeding grounds. Other threats include road mortality and predation by domestic cats. 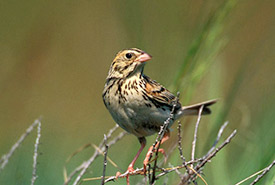 Lastly, there is Baird’s sparrow, the most at-risk species of the three. Baird’s sparrow is restricted to habitat in the prairies, the world’s most endangered ecosystem. This grassland bird has also been assessed by COSEWIC as special concern. Its numbers have rapidly declined due to habitat loss.

Baird’s sparrow has a yellowish-brown face and a sandy-coloured breast that is heavily streaked with black markings. It is a secretive bird, and its song is a distinctive three notes followed by a high-pitched trill.

It’s not too late to save the habitats that these sparrows rely on for survival. And there has never been a more important time to do so than now.

NCC is working to conserve natural areas across the country for sparrows and many of Canada’s most vulnerable species. Help us accomplish our conservation goals by making a donation here.