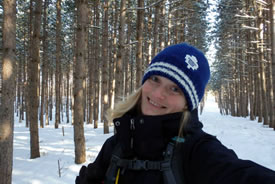 Believe it or not, when my alarm went off at 5:15 a.m. on Sunday, December 14, 2014, I actually sprang out of bed with a smile on my face. While I typically rue any waking in “the 5s”, this was one day I knew would be worth it: the 2014 Guelph Christmas Bird Count. This was my third year participating  and the anticipation of what we might see that day was enough to get me moving.

Our group gathered in the cold, dark parking lot of the University of Guelph’s arboretum at 5:45 a.m. Heads down against the cold morning rain, hands in pockets and eyes bleary, we introduced ourselves. There were an amazing nine participants who’d all dragged themselves out of bed for some birding this day. Led once again by the fearless Kyle Horner, an expert birder and naturalist, we carpooled quietly down to a forested property in the southern portion of our count square which featured the Eramosa and Speed Rivers through the centre of Guelph.

We were sure an eastern screech owl or great horned owl was out there, just waiting to answer our early morning calls. We must have broadcasted both sets of calls at least a dozen times, but all we were met with...was silence. Since this place was known to be a hub of owl activity, it’s quite certain that the owls were there, but were likely just tucked back in the trees, watching this crazy group of people at six in the morning march up and down the forest edges, hopefully holding our speakers against the darkness.

At one point a Canada goose honked back to our owl calls. Otherwise, the morning was silent.

However, we forged on. Fortifying ourselves with some warm drinks at a nearby Tim Horton’s, we burst back out into the gloom of a cloudy, foggy day’s dawn and drove back to the arboretum in search of woodpeckers, and more.

We were rewarded almost immediately with a hairy woodpecker and a downy woodpecker. Two down! We knew the arboretum was a likely place to spot pileated woodpeckers, so we wandered quietly through the beautiful forests and saw huge holes gouged out of standing dead trees. We knew the pileateds were there because of the evidence they’d left behind, but again, we were left wanting more.

The bird feeders outside the Arborteum Nature Centre delivered an array of American goldfinches, black-capped chickadees and (lucky for us) the only pine siskens we encountered that day. We had also snagged a bright blue jay and a scarlet northern cardinal — much-needed pops of colours against the morning’s dreary backdrop of grey. We spotted a couple of flyovers, including a red-tailed hawk and some common mergansers, the latter of which were not a guaranteed sighting in our portion of the count circle, and therefore a great relief to post on our very first stop!

We started counting Canada geese along the Eramosa River corridor near York Road, and we didn’t stop counting geese all day. At the confluence of the Speed and Eramosa Rivers near Guelph’s famous Boathouse and covered bridge, I patiently counted in pairs over 300 geese before my brain requested, “no more!” Combined with another group member who had counted geese starting from the other side of the pack, we decided on a total of 750 in a stretch of river that was less than one kilometre!

More fun than counting geese was picking out herring gulls from ring-billed gulls, where they lazily swam among the gaggles of geese. The red dot on the side of the herring’s beaks stood out like a target and I was able to count five of these, a rarer find than ring-billed gulls in Guelph and great to add to our growing species list.

On a stretch of the Speed River we spotted a lone male hooded merganser. As one of the more amateur birders in the group, I was so pleased to lay my binoculars on his giant patterned head even before Kyle did! Also, this bird was a lifer for me, making spotting him feel even more special. I couldn’t stop watching him, paddling around, diving under the water. Nature’s creations sometimes just turn out breathtakingly beautiful. 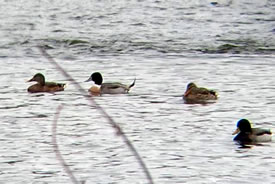 Further up the Speed we got to see nature making more beautiful creations, in a bird that not one of the nine of us had ever seen before.  In a group of over 100 regular old common mallards was a mallard that was just not quite right. Though he had the greenish head and similar patterning, his colouring was very strange and he had a giant dramatic swoop of a tail to top it of.

We determined this duck was the product of a love affair between a common mallard and a northern pintail. Northern pintails are very rare in Guelph, so this was quite an exciting find indeed! We could only hope that all of the other ducks didn’t laugh and call him names, or not let the pintail hybrid join in any waterfowl games...

We finished the day hoping to see a ruffed grouse and split up to plunge ourselves into thick cedar forests to hopefully rustle up one of these forest chickens. Alas, like most of the day, the forest was quieter than expected, so with only the flicker of dark-eyed junco white tail feathers and the “dee” of a chickadee, we packed up and head for the count tally.

Over hot apple cider and warm chili, we were pleased to see that it had been a productive day in Guelph overall, with eastern screech-owls, great horned owls and even a long-eared owl all being picked up by other teams. The variety and number of unexpected gulls (e.g. Iceland gull, lesser black-backed gull, glaucous gull) observed was amazing! Most interesting of all, a gray catbird, usually long, long gone by this time of year was observed flittering around some shrubs at Guelph Lake.

For me, seeing that we’d beaten the average number of species observed in our portion of the count circle pleased my competitive nature, but hearing and seeing how much other teams had observed has made me more than ready to head out again in 2015!

My tips for other CBCers this winter: