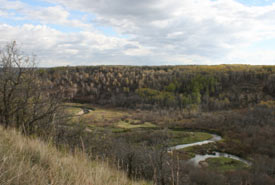 I grew up in southwestern Manitoba, living only a few minutes from both the American and Saskatchewan borders, and I have remained in the province while completing my undergraduate and graduate degrees. In the past year, I spent a lot of time travelling throughout southern Manitoba, working for the Nature Conservancy of Canada (NCC). This job has been an amazing opportunity to discover some of the natural wonders that this province offers.

From a young age, I have always loved the outdoors, spending hours outside playing at the park, or in make-believe forts composed of trees. At my grandparents' farm in southwest Manitoba, I would be on the lookout for wildlife and birds while playing in the snow. These were some of my first experiences with nature, but growing up in that corner of the province led me to believe early on that Manitoba was quite flat and made up of not much more than trees and fields with sporadic wetlands. 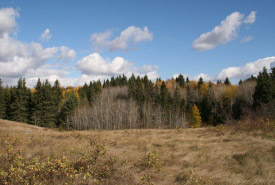 But I was wrong.

After moving to Brandon, Manitoba, to attend Brandon University, I studied botany and geography. Some classes involved field trips for field work within the province, but nothing has compared to the hands-on conservation field work I did for NCC. Work at NCC allowed me to explore many different landscapes and vegetation communities, where I saw a variety of wildlife. The most rewarding part of working for NCC was wandering through its properties, being completely cut off from outside distractions and being immersed in nature. 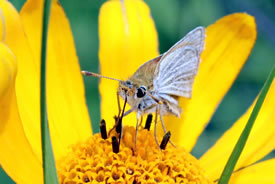 One of my favourite properties was in the Prairie Pothole Region south of Riding Mountain National Park. This property had rolling hills, with an abundance of wild flowers and mixed wood forests, and a small wetland marsh, where I would spend my lunch hour on a hill overlooking the wetland. 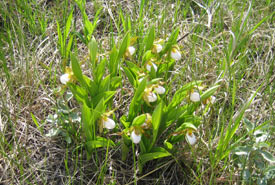 A cluster of small white lady's-slipper (Photo by Melissa Grantham)

From the sandhills in the west, to the tall grass prairies in the east, Manitoba is an interesting and diverse province. Some NCC properties that I had the chance to visit this year were home to rare species, such as Poweshiek skipperling and small white lady’s slipper. One sighting in particular — a red-headed woodpecker in Riding Mountain — is one I will treasure forever.

Not only did I get to learn more about rare and endangered species in Manitoba, but I had the opportunity to see them growing and thriving in nature.

Manitoba is a magical place, full of amazing natural scenery. The sandhills and lakes, the marshes and forests, and the rivers and springs are all beautiful and diverse.

Now, more than ever, I appreciate all that this province has to offer. 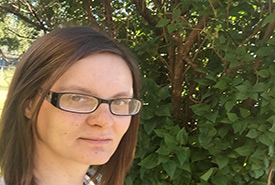 Ashley Greenley is the conservation biologist for the Nature Conservancy of Canada’s (NCC's) Manitoba Region.