A bird's-eye view: Mark Mallory's fascination with birds, and what they can tell us

Mark Mallory likes birds, and he’s not alone. Birds are popular, and not just among high-strung bird nerds elbowing their way through crowds for glimpses of avian visitations. Birds are one of the most diverse groups of organisms in the world and play a huge role in our cultural identity, even in a seasonally cold place like Canada.

What may not be so obvious is that if we are paying attention, birds may provide an opportunity to learn about the health of the ecosystems they live in, even if only for a short while. 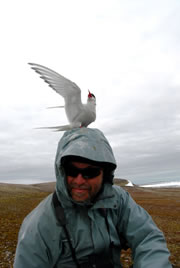 At Acadia University, where he began his Canada Research Chair in Coastal Wetland Ecosystems less than three years ago, Mallory supervises a large lab of almost 20 students who are studying a wide range of bird species and the ecosystems they inhabit.

And there's no shortage of mysteries for the researchers to solve.

Among their research topics, a review of historic data by Mallory and colleagues suggested the American black duck, a species with a long-standing association with Atlantic Canada, is overwintering in some parts of Nova Scotia in much greater numbers than previously recorded. Mallory and his students are trying to establish why this might be the case. Is it increased availability of food? Is it milder winter conditions? 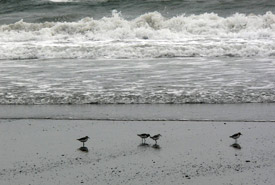 Understanding preferred overwintering conditions and feeding habits of black duck could potentially contribute to important decisions about future conservation efforts at places like Musquodoboit Harbour, where the Nature Conservancy of Canada (NCC) and the provincial government have been working in partnership to protect coastal ecosystems and habitats for 15 years.

Mallory emphasizes the importance of this type of work in the context of understanding the impacts of climate change on wildlife populations. A key concept in his work is what is referred to as a "mismatch." An ecological mismatch can occur when animal behaviour is altered as a result of changing environmental conditions. Take the example of warmer winters: if birds begin migrating earlier from wintering grounds in the south, will they still encounter the food sources they depend upon for their journey, or is the timing of their journey now out of sync with the availability of food resources?

This question is highly relevant to the massive staging of semipalmated sandpipers that occurs annually near Johnson’s Mills in the Upper Bay of Fundy. NCC has protected close to 500 acres (200 hectares) of coastal habitat directly adjacent to the extensive mudflats where the sandpipers feed voraciously on tiny mudshrimp. Over 80 per cent of the global population of semipalmated sandpipers come here for several weeks each August to feed and rest. In just a couple of weeks, they eat enough mudshrimps to double their body weight, fattening up before their journey south.

It's a spectacle even Mallory, who spent 20 years in the Arctic, describes as the most amazing wildlife observation of his life. If these birds were to begin arriving later in the season as a result of changing conditions at their summering grounds in the Arctic, would the vast food resources provided by the mudshrimp still be available?

North of Halifax within the Eastern Shore region of Nova Scotia is a large chain of remote and largely unoccupied near-shore islands that are exposed to the brute force of the Atlantic Ocean. Here, Mallory's students (including former NCC intern Molly Simon) have been collaborating with provincial Department of Natural Resources biologists to try to understand why local populations of common eider are declining. Tree mortality, caused by nesting cormorants, as well as an increase in predation by bald eagles, mink and otter, may to be blame for the decline.

Interestingly, minks and otters were not residents on the islands until recently. Their arrival appears to be correlated with a change in the timing of common eider egg-laying. Islands with higher exposure to predation by mammals have seen the timing of egg-laying change, while islands with less predation have not.

In a twist of the environment-impacts-bird tale, Mallory and his students are investigating the role of birds as vectors for "bio-transport." Birds may accumulate higher than normal levels of trace elements in their bodies as a result of a process known as bio-magnification — when the concentration of an element increases steadily as it moves up a food chain.

Because colonial birds nest and live together, the resulting impact can often be a terrible mess of bird carcasses, feces and other bird outputs that contain trace elements. Mallory and his team are seeing initial results that show differences in soil chemistry between sites occupied by a bird colony and those not occupied. Here, it’s a case of environment-impacts-bird-impacts-environment. 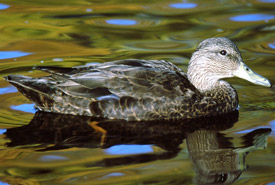 To date, Mallory’s work in Nova Scotia has focused on fairly discrete sites. However going forward he hopes to initiate efforts to examine migratory birds' use of coastal wetlands along the entire Atlantic coast, bringing together his experience and knowledge of the Arctic and his newfound home in Atlantic Canada. While general knowledge exists regarding migration patterns of many species, there is little detailed information on use of particular wetland habitats by specific species.

This research is particularly important for shorebirds, of which more than two thirds are currently in decline in Canada.

Gathering this type of information is now relatively easy, given the explosion in technology available for tracking bird movements, which in Mallory’s worda has been revolutionary and is fueling new findings at an extraordinary pace. Mallory stresses that every time he tracks bird movements, he learns something new about the species and their use of coastal wetland habitats.

The canary in the coal mine

In today’s complex and changing world it is comforting to know that scientists like Mark Mallory and his team are watching birds closely to detect environmental changes. Detecting change facilitates discussion, permits planning and allows society to make informed choices.

Like the proverbial canary in the coal mine, birds of all kinds can provide tremendous insight into the environment around us. That is, if we pay attention. 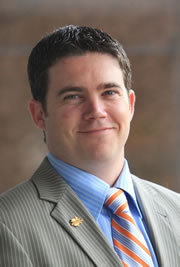 Craig Smith was the Nature Conservancy of Canada's program manager in in Nova Scotia.