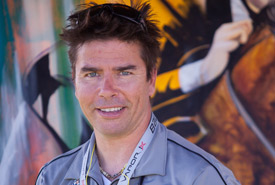 Recently, I phoned David Arrigo to chat about his art, his experiences with nature and this year's Gifts of Canadian Nature campaign collaboration. Below is Part Two of our two-part interview (Part One is here):

WH: Can you tell us a story behind one of your paintings?

DA: A couple of years ago on the beach behind our backyard, there was a lot of scuffling in the early morning. We couldn’t figure out what it was, as the sun was down. As the sun came up, we saw there was a large animal that was down and smaller animals around it.

You could tell they were coyotes, or so we assumed. I got out my camera and edged up close to the window, where we were at most 30 to 40 feet away from on the scene. And there was one coyote that kept on popping her head up. It ended up being a wolf!

I had a hunch at first because of the way she looked but we never heard of wolves around the area. But as I was talking to locals and people from the Niagara Escarpment, they looked at the pictures I took and confirmed that it was a wolf. There had been one or two wolves in the area, creating coywolves. The others were apparently her puppy coywolves. It was just an amazing sight to see!

So I took that memory and added a few more images to create the final painting of the wolf.

WH: What an encounter! How do you think we can use art to better share our connections with nature, such as this moment you had?

DA: It comes down to personality. Whatever you store in your mind is your own personal painting. For me, I put it down on canvas. Some people do it through dances, in movements; others sing about it. I think art is a very important to tie to nature because it raises awareness. What we’re doing here is to raise awareness and funds to support a cause.

WH: Can you offer any advice to aspiring artists?

DA: For me, I am very fortunate to have been surrounded by a lot of support. No matter what, there’ll always be someone who tells you that you can’t make a living out of art. At the end of the day it comes down to following your dreams. I never took art at school (in fact, I failed grade nine art) but I’m very lucky to have had a lot of practice. I’ve always enjoyed art and did it on my own time.

So don’t take no for an answer!

WH: How did you feel about this project overall?

DA: I’ll tell you something: this is by far one of my favourite projects in a long time! I’ve never considered myself a wildlife artist, but I definitely look forward to doing similar pieces in the future because I enjoyed them so much. It’s just a breath of fresh air!

It’s a great honour to be involved in the project. It’s definitely a team effort where my role is to take everyone’s vision and put it on paper.

For a sneak peak of David's art work, click to enlarge the slides below.

For more information about the Gifts of Canadian Nature program, visit www.giftsofnature.ca.