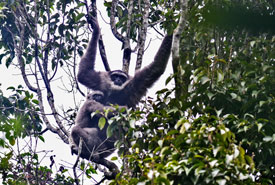 Every day, countless inspiring and informative stories are published about conservation successes or discoveries in nature and wildlife around the world. Here are some that caught our attention in November 2017:

DNA evidence reveals that the Lord Howe stick insect, which was once thought to be extinct, actually isn’t.

Stick to the story here >

Lady of the flies

Dr. Erica McAlister, fly curator at London’s Museum of Natural History and author of The Secret Life of Flies, discusses the importance of this often irritating insect group.

Born to be wild

A pair of Javan gibbons recently gave birth to a baby — the first to be born in the wild to parents saved from the pet trade.

Climb to the story here >

U.K. scientists plan to have surfers, scuba divers and anglers monitor difficult-to-access coastlines that are susceptible to climate change.

Keep track of the story here >

The Government of Canada is thinking of using a $400 million fund and an innovation prize to explore ways of helping protect North Atlantic right whales in the Gulf of St. Lawrence.

Get a pinch of the story here >

Researchers have discovered that the wings of crested pigeons function as alarm signals when they flee from danger.

Not a lot of axolotls left in the wild

With only 35 individuals per square kilometre remaining, the axolotl, a type of salamander native to Mexico, is on the brink of extinction in the wild.

In her book The Aliens Among Us, biologist Leslie Anthony explains the negative impacts of invasive species, how they spread and how we can tackle them.