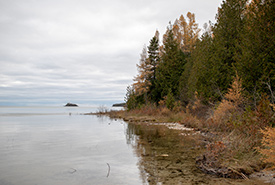 Cockburn Island is a paradise for nature lovers, and we can prove it! Only one person lives on the island year round, with his dog, Max. The rest of the island is left as a wilderness paradise for the bears, wolves, coyotes, deer and the small seasonal community to enjoy.

In summer 2018, Nature Conservancy of Canada (NCC) staff and a team of botanist volunteers conducted botanical inventories across the island, focusing on wetlands. They also surveyed shoreline and newly acquired NCC lands. The results were more than we could have hoped for! 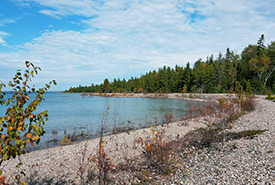 The team identified 562 plant species, 72 of which had never been previously recorded on the island. Needless to say, the biodiversity on Cockburn Island is plentiful. One of the most notable discoveries of the trip was a newly documented dune thistle (also known as pitcher's thistle) population on the shoreline that contained more than 600 plants! This is one of the largest populations in Canada. Dune thistle is listed as a threatened species in Ontario due to habitat loss and degradation, so protecting shoreline on Cockburn Island where healthy populations exist is vital.

In many respects, Cockburn Island is a safe haven for plants and wildlife, as it is isolated on Lake Huron and there is minimal development by humans. However, there is a plot twist to this story: The shoreline of our beloved island is under siege by an army of invasive phragmites, a plant with the potential to take over the wetlands and shorelines, altering the water table and making them uninhabitable for native flora and fauna. 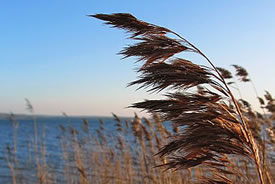 Phragmites is the most invasive plant in Canada. So what can we do? This is where stewardship comes into play. While NCC is a land trust, acquiring land to protect it for future generations, we also take care of that land. This summer, the botany team spent many days surveying and mapping locations where invasive phragmites occurs on the island, focusing on two large populations at Mud Bay and Ricketts Harbour. This information, combined with previous years’ data, has informed our comprehensive Invasive Phragmites Management Plan for Cockburn Island.

NCC also has been working with Judith Jones, a local ecological consultant, to tackle phragmites on the ground. With the help of Cockburn Island volunteers, Judith’s team recently managed a colony of phragmites growing along the beach and in the water for nearly 100 metres at Ricketts Harbour. Considering phragmites can grow as dense as 200 stems per square metre, that’s a lot of cutting!

What was interesting about the Ricketts Harbour phragmites is the impact it was having on monarchs, also an at-risk species in Ontario. The adult monarchs had laid eggs on a patch of their host plant, common milkweed, on the beach next to the phragmites colony. Instead of pupating on the native shrubs that would have otherwise inhabited parts of the beach, the adult caterpillars had climbed up the phragmites stems to form chrysalises. This affects our ability to control the phragmites, as it prevents conservation staff from cutting down phragmites stems that have monarch chrysalises on them. 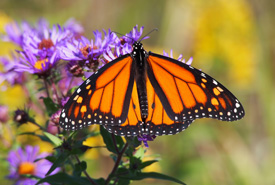 While we were aware that phragmites impact the nesting habitat and movement of native wildlife, such as turtles and shorebirds, the impact on monarchs was something we had not foreseen. Because the phragmites had taken over the native habitat where monarchs typically pupate, the caterpillars didn’t have a choice! With great care, Judith’s team relocated 130 caterpillars, 25 chrysalises and 19 eggs to safe areas where they can grow and emerge as butterflies without the threat of phragmites.

Ricketts Harbour may be just one part of a vast island, but each invasive species that is removed prevents it from spreading and protects valuable habitat for our at-risk species. NCC still has a lot of work to do when it comes to invasive species on Cockburn Island, but the stewardship team will not let phragmites win! 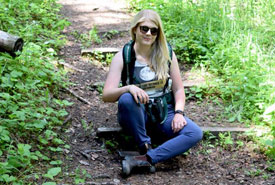 Kaitlin Richardson is an acting coordinator of conservation biology for NCC's Ontario Region.