Pointe Saint-Pierre: A site of natural splendour and heritage 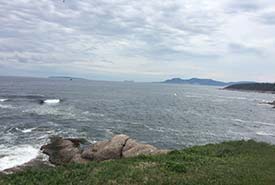 With four months off between two university semesters, I had a decision to make: Would I work, or would I travel? I looked for work away from the Quebec City centre, and the best of both worlds offered itself to me. I could actually work and travel at the same time! When I accepted an internship position with the Nature Conservancy of Canada (NCC) in the Gaspé area, it opened a door to discoveries in a region I had never set foot in.

As a student in environmental studies, the internship supported my studies and interests, while offering an enriching and stimulating experience in out-of-the-ordinary natural areas. I left my familiar surroundings to spend a summer two steps away from the beach, waves and mountains. My experience so far has proven that I made a good decision. 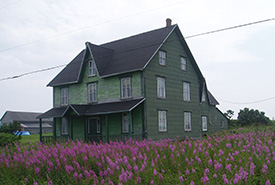 As part of my internship, I’ve had the opportunity to visit breathtaking locations, in particular Pointe Saint-Pierre, situated between Gaspé and Percé. This area, which boasts fields, coasts and forests, is peppered with a few houses. Among them is the LeGros House, which sits on an NCC property. This heritage home, built in the early 1900s, is a reminder of a time when New Jersey cod fishermen worked in the area. The house is distinctive, with its weathered olive-green front, which illustrates the numerous storms it’s had to endure.

Pointe Saint-Pierre is home to the Pointe Verte coastal forest. It’s a pretty rare natural area in Gaspé. The forest provides habitat for a number of mammal species, from coyotes to porcupines, as well as various bird species. I discovered Pointe Verte during a Conservation Volunteers event at the start of my internship. The event aimed to maintain a hiking trail on the NCC property. Little did I know that I would be blown away by Gaspé’s landscapes. 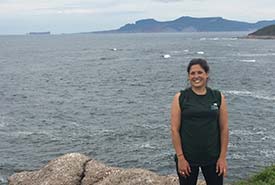 One day in May, while hiking the trail, I was treading through the last spring snowdrifts, walking among balsam firs. Unexpectedly, the coastal forest opened up onto the most awe-inspiring views I’ve ever seen. Astounded, I realized that I had decided to travel to Gaspé for exactly these moments. Standing still, in front of the grandeur of the Gulf of St. Lawrence, at the edge of a cliff face, I admired the rocky, red escarpments of Percé in the distance, and the silhouette of île Bonaventure. Percé was all the splendour I had expected. I breathed in the smell of salt water and kelp. Sea gulls, cormorants and eider ducks flew over the point, adding to the enchanting scene. I was amazed to see common seals lounging on rocks or watching me curiously while swimming. This area was once known by the name of Paradise Point, and now I know why!

I now understand the importance of conserving this area. I’m proud to have helped with planning the development and opening of the trail on Pointe Verte. The property officially opened to the public in mid-July 2018. I invite you to come discover why it’s such a unique area. You’ll then be able to understand the importance of conservation for our children and grandchildren!

Pointe Saint-Pierre is one of the Nature Conservancy of Canada’s properties featured in Nature Destinations, a program that invites you to take a journey through some of the greatest examples of our country’s natural areas and to connect with nature. Visit naturedestinations.ca. 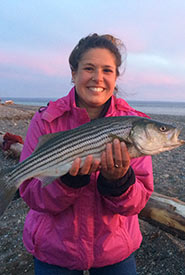 Isabelle René Isabelle is a 2018 summer stewardship intern with the Nature Conservancy of Canada in Quebec. She is majoring in environment studies at Sherbrooke University.