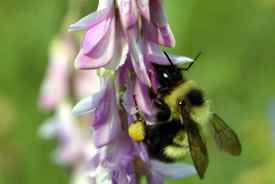 After the relative calm of my June field work on Nature Conservancy of Canada land near Riding Mountain National Park, I was kept very busy observing insects in July and August. In total I saw approximately 64 insect species making over 1,200 flower visits during my 24 hours of observation over an eight-day period. So far it seems that in the fescue prairie the bees (particularly the bumblebees) are doing most of the work. This is in contrast to the Tall Grass Prairie Preserve, where flies are the most common flower visitors and Spruce Woods Provincial Park, in which sand wasps are abundant pollinators. 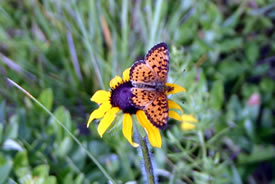 So which plants are popular? The bumblebees seem to have a particular fondness for legumes. Legume flowers typically require longer-tongued insects, like bumblebees, to effectively pollinate them. The bumblebees were mostly visiting hedysarum (Hedysarum), locoweed (Oxytropis), purple prairie-clover (Dalea purpureum) and milk-vetch (Astragalus) flowers, although they also seemed to like bell-shaped flowers like harebell (Campanula rotundifolia) and snowberry (Symphoricarpos occidentalis) too. 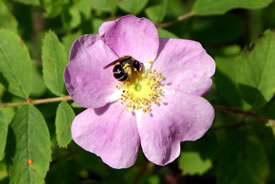 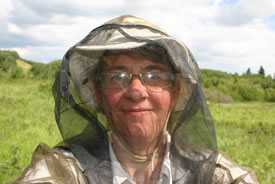 Unfortunately, the pollinators weren’t the only hungry insects in the prairie; several of them were out for blood-MY blood! When I got to the preserve, I had no idea what the mosquito situation would be like. I decided to wear my bug jacket and gloves just in case because if I didn’t need them, I could always take them off but if I needed them and didn’t have them, I’d end up doing the “I’ve-got-the-mosquito-willies-boogie" all afternoon.

The gamble paid off. Shortly after reaching the hiking trail I was covered with a cloud of mosquitoes, black flies and deer flies all trying to nip my tender flesh! Thank goodness for nylon field pants! After I got to one of my plots and stopped walking, several dragonflies noticed the mosquito buffet hovering around me and began dive bombing the blood suckers. Thank-you dragonflies! 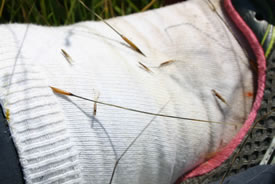 Stipa in my socks (Photo by Diana Bizecki Robson)

The mosquitoes weren't the only things biting in August; the plants were, too! Mid-August is when the fruits of speargrass (Stipa spartea) ripen and fall off so they can plant themselves in the ground. Unfortunately they also have a habit of planting themselves in my socks and I had to stop every few minutes or so to pick them out!

So why am I doing this? The purpose of my research is to identify which wild plants are most popular with the pollinators so that appropriate seed mixes for restoration of the fescue prairies can be identified. Restoring a prairie is expensive; by selecting a seed mix with the most popular flowers you can encourage the colonization of the maximum number of pollinator species, and hopefully create a more resilient ecosystem.

I’ll be back in the field in mid-September for one last pollinator survey. Is it too much to hope that the mosquitoes will be gone by then?