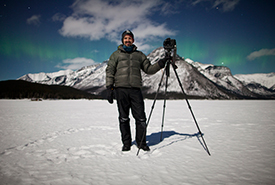 Paul Zizka is a professional mountain landscape and adventure photographer based in Banff, Alberta. Land Lines Managing Editor Christine Beevis Trickett recently chatted with him about photography and his connection to nature.

CBT: How does your photography help you explore the tensions between humans and nature?

PZ: As a photographer who likes to document weather oddities and backcountry places, I get to experience that tension first-hand on a regular basis. Often my goal with a photograph is to convey that tension to others who perhaps have never experienced anything like it, or have never been anywhere close to the location featured in the photo. In order to achieve that, I often find myself including a human element in the frame (typically me, since there is no one else around). I find that in doing so I make it easier for viewers to sense that tension; that vulnerability that humans can feel when faced with the power and wonders of the natural world.

CBT: What role do you think photography can play in conservation?

PZ: I have always believed that the easiest way to get people to care about something (and take action in protecting that thing, if need be) is to first get them to experience, understand and love it. Getting out in the field with workshop participants, for instance, allows me to play a small part in making that happen for others. For those I will never get to meet, perhaps because they are unable to visit the mountain parks themselves, I am thankful that I can rely on the amazing power of a photograph to help them appreciate a place despite the distance and perhaps instill in them the desire to preserve it.

CBT: How many images does one need to take to convey sense of place? Can one capture sense of place when shooting weather conditions that are atypical of the location?

PZ: In a dynamic place like the Canadian Rockies, I have come to the conclusion that all one can show in one photograph is an instant in time at a given location. There is just no "typical" weather/light for any place around these parts, and one would need an extensive body of work to give someone a remotely accurate idea of what the place can really be like. There is something fulfilling about accepting that is all one can do: conveying a moment in time, as opposed to attempting to thoroughly document an area in one image!

CBT: Do wider shots provide more of that sense of place than tighter ones?

PZ: Not only are the Rockies dynamic, but they also offer an astonishing array of life forms and terrain types. Again, one photograph can't do it all and one must look at changing lenses constantly in order to do justice to all that a location has to offer, from the intimate detail to the big, sweeping views.

PZ: I feel like sharing a section of my book, Summits and Starlight: The Canadian Rockies, is fitting here:

"There is nothing like crossing a glacier in an electrical storm to remind you who is in charge — not that the day to this point had been free of challenges. The incessant downpours of June 2012 had left the Niles Meadows trail in shambles, and much of it lay underwater. Carrying the overnight packs up 1,200 metres and over unstable snow to Niles Col had left everyone a little weary. Trying to beat approaching tenebrous clouds to the top of Mount Daly to sneak in a rushed ascent had made matters a little worse. And when the first drops of freezing rain hit shortly after we set foot on the Waputik Icefield, I think we all understood that the last kilometre to the Scott Duncan Hut was going to be the most demanding. As lightning flashed all around, the sound of thunder grew closer, our axes started to buzz, the rain turned from pouring to torrential and the visibility dwindled, I was thankful we were going to stay at the alpine hut that night.

"My idea was to head to a location that was elevated and largely free from light pollution. A coronal mass ejection was going to disrupt the Earth’s magnetic field that night and produce perhaps one of the decade’s finest displays of aurora borealis. The Scott Duncan Hut seemed to fit the bill, and my wife, Meghan, and friend, Ian, were keen to head up there with me. The thought of watching the northern lights dance for hours over the Waputik Icefield, and being able to photograph them from the vicinity of a warm, dry shelter, appealed to me tremendously. Only, when we finally got the hut, soaked from head to toe, the winds were howling and the rain was travelling sideways. Our hopes of seeing the aurora that night had all but vanished.

"It amazes me that after twelve years of wanderings in the mountains I still underestimate how quickly Mother Nature can turn things around in this part of the world. My slumber was soon interrupted when the alarm rang at 10 p.m. I reluctantly crawled out of my sleeping bag and dragged my feet towards the hut door, expecting to be greeted by whiteout conditions and back in the arms of Morpheus in no time. But in that moment the magic of the mountains struck yet again, further cementing my passion for the hills. As I opened the door I could clearly see emerald ribbons of aurora gracing the northern horizon even though darkness was just settling in.

"I will never forget the hours that followed. I woke up my companions and then scoured the bouldery, snowy slopes surrounding the hut in my down booties in search of aesthetic compositions. Amazingly, both sides of the Continental Divide remained shrouded in clouds. Yet, right above our little, improbable shelter the skies stayed clear for several hours, giving us a window into one of the best celestial shows we had ever witnessed at such latitudes. In the silent night, the vast expanse of the Waputik Icefield faithfully reflected the colours patterns overhead."

CBT: What Canadian landscape destination is on your bucket list to photograph?

PZ: Among many others: the Torngats and the Extreme Far North.

CBT: What makes photographing mountains unique or different to, say, photographing prairies or the ocean? In other words, what keeps you coming back to them?

PZ: Again it comes back to a feeling of vulnerability. We are photographing subjects that are so big and occasionally dangerous, and that have been standing there for so long. There is an extra feeling of awe, reverence and scale that comes with mountain photography.

CBT: Any tips for new or aspiring landscape photographers?

PZ: Get out of your comfort zone, have fun with it, and don't do it for the "likes" in this era of social media!

Paul's first photography book, Summits and Starlight: The Canadian Rockies, hit the shelves in October 2013 (published by Rocky Mountain Books). See more of his work online at www.zizka.ca or follow along on Facebook.