The tall trees in the MacMillan Nature Reserve stand like an island of green within the urban matrix of Vaughan, Ontario. Sprawling and sparkling new subdivisions splash up against three sides of this natural area; a five-lane roadway borders the rest. Streaming traffic provides the roaring surf around the edge of the woods, while the CN Tower blinks to the south, a distant lighthouse beacon.

When the late Lyn and Robert MacMillan donated their land to the Nature Conservancy of Canada (NCC) in 2004, it was a farm property in the middle of farm properties. But a growing sea of development approached from all sides. They wanted their beloved land to be protected, for its own sake and for the benefit of the community. Their generous gift is now a priceless natural asset in the heart of the city. 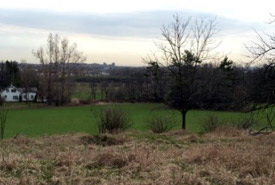 Despite the fact that you can have pizza (and pretty much anything else) home-delivered to this nature reserve, it remains remarkably untrammeled. It is a 123-acre (50-hectare) oasis for native plants and animals, with forest, field and stream habitats that help sustain another anomaly: a rare and sensitive fish species.

The redside dace is a striking species that lives in cool southern Ontario streams and their headwaters. Unlike most of its freshwater cousins, it feeds mainly on flying adult insects rather than aquatic insect larvae, and has to leave the water to get its food. It makes body-length leaps out of the water to catch passing insects, and darting lunges to snatch insects perched like low-hanging fruit on streamside vegetation.

To successfully spot and propel themselves at their above-water prey, redside daces need clear water with overhanging plants and trees that provide shade and insect food. Many of these habitats have been lost or degraded, particularly around the Greater Golden Horseshoe. The redside dace, listed as an endangered species in Canada and Ontario, has died out in about half of its formerly occupied streams. Where the species still survives, the available habitat has been greatly reduced. 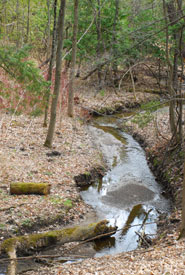 A tributary of the Don River flows through the MacMillan Nature Reserve, and redside dace inhabit this stream just south of the property. The reserve itself is considered to be “contributing habitat” that produces clear, cool water for downstream populations. To enhance conditions further, NCC is working with the Toronto and Region Conservation Authority and the City of Vaughan to restore stream habitat in the reserve. An old dilapidated dam is being removed, and culverts that interfere with natural stream flow are being removed or improved. Native trees will be planted to increase forest cover around the stream.

NCC nature reserves provide protected homes for dozens of Ontario’s species at risk. In field studies sponsored by the Ontario Ministry of Natural Resources Species at Risk Stewardship Fund, NCC staff made 640 observations of 59 nationally and provincially ranked species on NCC properties in 2016 alone. The fund is also supporting scores of on-the-ground habitat restoration projects on NCC lands across the province, to help intriguing but beleaguered species such as the redside dace on the road to recovery.

Learn more about the conservation efforts of the redside dace here.