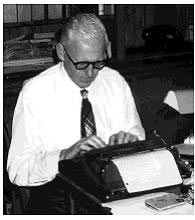 Whenever I see reference to Bird Studies Canada’s James L. Baillie Memorial Fund for Bird Research and Preservation, I think about my friendship with Jim Baillie and feel privileged to have known him for so many years. I wanted to share my memories of Jim because, although the Baillie Fund retains his name, many present-day bird enthusiasts know too little about this remarkable man.

I met Jim Baillie in 1934 when I was 12 years old. My first impression proved to be lasting — he was gracious, caring and passionate about birds.

As I walked down Leslie Street in Toronto one Sunday, I spotted two men at the northwest corner of Ashbridge’s Marsh, peering through fancy binoculars. When I asked what they were looking at, one of the men handed me his binoculars. The other, Jim Baillie, said, “Those shrubs are covered with birds from the Canadian — and maybe even the Russian — tundra.” He listed several names new to me, including “hoary redpoll.” Then Jim said, “Birds seem to interest you. Come walk with us.”

Before we finished rounding the marsh with its watery spaces, willow trees, and sewage smell, Jim showed me many exciting things. We saw a great horned owl on its nest, migrating whistling (now tundra) swans, and a "butcher bird" (northern shrike) on a hawthorn tree, with mice and a junco impaled on its thorns.

My friendship with Jim began that day, and lasted until his fatal heart attack 36 years later. We enjoyed many trips along Toronto’s lakeshore and marshes. With my boisterous family, we visited Point Pelee — first camping there, and later renting a cottage together at what is now the site of the Park Education Centre. I recall the morning Jim knocked on our door and shouted, “That’s a kentucky warbler singing loudly, best you get up!”

One June day in 1954, my office phone rang and Jim said, “Somebody claims to have seen a cardinal in High Park. Are you interested in joining me? We can take the Bloor streetcar.” My car was faster, and half an hour later we saw and heard a harbinger of the huge cardinal invasion that nature herself was provoking.

On another day, Jim called my office and said, “Get to your window. I have never seen a bigger fall hawk-flight over the museum.” I looked out from my 7th floor window at St. George and Bloor to see scores of broad-winged hawks streaming by, and a host of other hawks soaring over Varsity Stadium, almost at my eye-level. If only flocks of this size could still be observed annually!

The passion for natural things Jim stirred in me never subsided, nor did our friendship. He never drove a car, and encouraged hosts of amateurs like me to call in to take him to see birds of special interest in the Toronto area. Jim’s gentle nature cemented countless close friendships. His passion for birds enriched so many lives.

I know some details about Jim’s professional life. When the University of Toronto created academic appointments for senior members of the Royal Ontario Museum’s Biology Department in the late 1950s, Jim (who never had completed high school before beginning work in ornithology), became the Head of Ornithology.

Nobody had Jim’s depth of wisdom or knowledge in field ornithology. His night classes on bird recognition and habits were very popular. Field guides, including Peterson’s, were still in the pipeline. In one of his lectures he said, “If you hear a fast and unduly bubbly robin, it’s probably a rose-breasted grosbeak. If you hear a hoarse robin singing out of easy sight in the forest canopy, it’s possibly a scarlet tanager.” I still recall Jim when I hear these sounds each spring and summer on my Happy Valley Forest property north of Toronto.

Jim made birdwatching a scientific pursuit, and had a wide circle of admirers on both sides of the Canada-U.S. border. He promoted bird artists and writers, including Vancouver’s Fenwick Lansdowne, Ottawa’s P.A. Taverner (author of the classic Birds of Canada), and Toronto’s Murray Spiers heading for a doctorate in ornithology.

Jim fostered the creative writings of Fred Bodsworth and Farley Mowat. He gave advice to the research of Bruce Falls and helped nurture Bill Gunn in providing early recordings of bird songs. With John Livingston, Jim played an important supporting role in introducing the Audubon Society to Canada.

There was only one Jim Baillie. He was like a father to many of us when it came to natural things. I’ll never forget him licking his pencil to add a record to his day’s notepad — the back of his cigarette package. His only moments of impatience were expressed in his pioneering environmentalism. Jim is greatly missed and fondly remembered!

Reprinted with permission from Bird Studies Canada. This article originally appeared here. This is the first in a series of monthly blog posts Dr. Barnett will be contributing to Land Lines in the next few months.