Heard it from a Scout: The business of bees 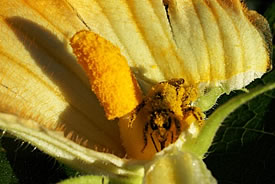 Everything in our world is connected. So when you get a group of species dying at an extremely rapid rate, such as bees, it not only affects them, but humans and other species too.

Pollinators provide a monumental impact on wild plants and crops, and play a crucial role in the production of our food. There are more than 800 species of native bees in Canada, and they are the country’s most common pollinator. Despite their crucial role in agriculture, there has been a decline in bee populations due to pesticide use, climate change and habitat loss. 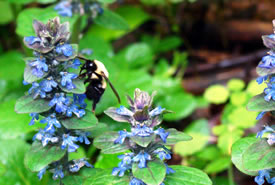 Many of the native bee species in Canada nest alone, classifying them as solitary bees. Solitary bees nest in small holes, laying their eggs inside and moving on to a new location. Though solitary bees can live in any cavity, urban sprawl has affected their habitat and ability to survive by reducing the amount of native plants available to them for pollination.

Scouts Canada allows youth to gain a new understanding of the important and fragile relationship we share with nature. My group, the 6th Erin Mills Scout Group, and I attended an environmental camp to work on projects to help solve problems facing the planet. In order to help the decreasing bee population, a fellow Scout and I decided to create bee boxes, to combat habitat loss of solitary bees. 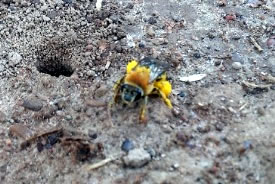 To create the bee boxes, we cut down phragmites that were growing on the side of the road. Phragmites are an invasive plant species that grows in standing water, usually on the sides of roads and in ponds. Phragmites pose a threat to native species, as their roots often choke out other species, such as milkweed, an essential food of monarch butterflies. Phragmites are the perfect material for building bee boxes, as the hollow centre in the plant’s stock is perfect for most solitary bees to fit into. By using phragmites, we not only cut down on the cost of building the boxes, but also eliminated some of the invasive species in our area.

When making the bee boxes, it is important to use untreated wood and provide cover from the elements so bee larvae can develop and hatch undisturbed. We built boxes that were 30 centimetres by 30 centimetres, and used old shingles as a roof to protect the boxes from rain and snow. The boxes were enclosed on all but one side and were filled with the cut phragmites. Since bees are attracted to bright colours, we painted some of the tips of the phragmites with blue nail polish. We then hung the bee boxes on a fence about two feet off the ground, and facing south so the morning sun would warm them. 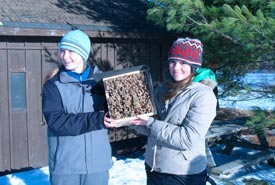 By making these boxes, we learned about the importance of protecting native bee populations and fighting invasive species. Building bee boxes is an easy and fun activity to do with your family to help bring native bees to your neighbourhood. Helping to save the bee population is the first step towards encouraging future conservationist to take environmental responsibility.