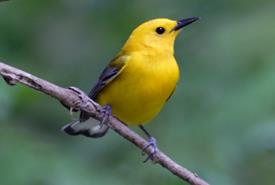 Every day, countless inspiring and informative stories are published about conservation successes or discoveries in nature and wildlife around the world. Here are some that caught our attention in September 2019.

Wildlife species are adapting their behaviour patterns to cope with the escalating climate crisis. What can we learn from our furry and feathered friends?
Pick up some tips here >

Falling from the sky

Bird populations across North America have declined by three billion in the last 50 years.
Fly to the story >

Conservationists in East Africa are using beehive fences to stop elephants from raiding crops and to prevent human-elephant conflicts.
Buzz over the story >

A newly discovered giant salamander species that can measure up to 1.8 metres in length may be the world’s largest amphibian.
Measure the story for yourself >

A recent study finds that the world’s most widely used pesticides cause rapid weight loss and delay migration in songbirds.
Migrate to the story >

Tree-planting initiatives are growing across the world. Find out how a few large-scale projects are helping reforest our planet.
Dig into the story >

Science at the top of the world

The largest-ever Arctic research expedition set sail earlier this month for a year-long study on climate and wildlife.
Bundle up with the story >

Asian giant hornets have been found hibernating on Vancouver Island. This invasive species has been known to destroy entire honey bee hives.
Wake up to the story >

Leading the call for climate action

Sixteen-year-old environmental activist Greta Thunberg is galvanizing youth around the world and calling for immediate climate action. Learn a few of her ideas for how we can all make a difference.
Hear the call to action >