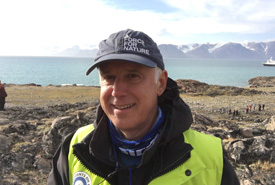 Earlier this month, John Lounds, the Nature Conservancy of Canada’s (NCC’s) president and CEO, set sail from Resolute Bay, Nunavut, to explore the Arctic with Students on Ice.

As this is a place that very few Canadians have had the opportunity to explore, I asked John to share his experiences of Canada’s North. Read my interview with John below: 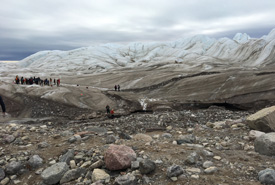 RB: What has been your favourite part of exploring the Arctic with Students on Ice?

JL: The place itself, the enthusiasm of the students and the variety of people working hard to protect this environment and support the work towards reconciling our relationships with nature, with the Inuit peoples and each other. The combination of Inuit students, along with young people from southern Canada and other countries, is a source of hope for our future. I came away from the expedition energized and positive about the future of conservation.

RB: What’s something you learned about the Arctic ecosystem while on this trip?

JL: Ice and open water drive everything. The ice edge is a very important place, both for wildlife and the Inuit peoples who live here. In the winter time the polynyas (areas of open water surrounded by sea ice) are where Arctic life congregates — birds, fishes, seals, polar bears and hunters. 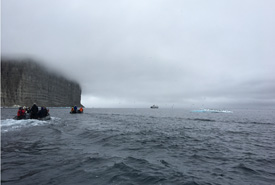 I learned that the North and South Poles are where you will find the most species of pinnipeds — aquatic fin-footed animals. These animals are unique to their southern or northern ranges. So, for example, you will only find walruses in the North and leopard seals in the South. Pinnipeds actually evolved from meat-eating land animals. In the Arctic, they breed where there are few predators — on islands or ice floes.

RB: On this trip, you visited Tallurutiup Imanga/Lancaster Sound. What was your initial impression of this part of the North? Was there anything that surprised you?

JL: There were a few things that surprised me on my trip. There are 86,000 breeding pairs of thick-billed murres — the penguins of the north — that breed on Prince Leopold Island every summer.

I learned about how seals create a snow cave in the winter for breeding purposes, and how the Inuit use dogs to sniff out these locations to help them hunt seals.

RB: This is such an amazing area. What is NCC doing to ensure places like Tallurutiup Imanga/Lancaster Sound are protected?

JL: It is an amazing place — an area of rich biodiversity that has sustained the Inuit people for millennia. 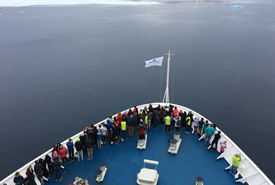 Group on the ship (Photo by NCC)

It’s also unique. For many years, the people of Tallurutiup Imanga have held a desire to see a durable conservation solution — a National Marine Conservation Area (NMCA).

That is now happening. The authority for the management of areas such as these rests with governments and the local population. But NCC’s expertise in conservation science and working with private rights to land can provide support.

In Tallurutiup Imanga/Lancaster Sound, Shell Canada held more than 8,600 square kilometres of oil and gas permits. NCC worked with Shell Canada to release the permits and turn them over to the government. This made possible an expansion of the boundaries for an NMCA, in line with the aspirations of the Inuit of Nunavut. We were pleased to see those expanded boundaries announced on August 14, 2017.

RB: What does NCC do to ensure areas like Tallurutiup Imanga/Lancaster Sound are protected?

JL: NCC’s role in areas such as these is to determine whether NCC’s expertise in science and in facilitating solutions regarding private rights in land, can help to achieve a conservation solution, such as an NMCA.

In Tallurutiup Imanga/Lancaster Sound, NCC worked with Shell Canada and the Government of Canada to help facilitate the contribution by Shell Canada of more than 8,000 square kilometres of oil and gas permits.

RB: How can Canadians do their part to help protect species, lands and waters in Canada?

JL: We all need to share the responsibility of caring for our natural world — individuals, governments, communities, corporations, farmers, hunters, naturalists. This means taking care of the natural world in the communities and watersheds where we live. It means supporting the work of conservation organizations, corporations and others who are showing leadership in taking the care of our lands and waters. And it means supporting Canadian leadership in efforts to reach a target of protecting 17 per cent of our land and fresh water in Canada by 2020, and going beyond to having at least 25 per cent of Canada protected by 2025.