Tailing biologists on a local "bat blitz" near Osoyoos 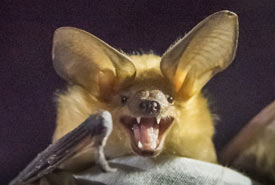 It’s Sunday afternoon and I have a date with a large group of biologists conducting a bat blitz at the Sage and Sparrow Conservation area [in BC's Okanagan region]. The forecast is calling for a severe thunderstorm, but I have no way to phone the biologists in this wild area beyond cellular reception to see if the blitz is still a go. So I head up anyway.

As dark clouds roll in and it starts to rain, Leigh Anne Isaac, one of two lead biologists on-site, is in her old truck conducting an interview about the event. The four-night bat blitz is an effort to compile an inventory of bat species on this land owned by the Nature Conservancy of Canada (NCC).

The Sage and Sparrow grasslands are home to an estimated 14 bat species, some of which are extremely rare and appear nowhere else in Canada. The research will help with conservation management and also establish benchmarks of bat populations. Particularly worrisome is a disease, white nose syndrome, that is wiping out millions of bats in eastern Canada and the U.S. Knowing what bats exist here will help to recover their populations in the future and protect their habitats when numbers are low.

Still in her truck, Isaac is explaining that so far the biologists have identified nine of the 14 target species on the properties after two nights. Five have yet to be seen — the spotted bat, canyon bat, fringed myotis, hoary bat and pallid bat. The canyon bat lives in the United States and has not been seen in Canada. Nonetheless, a researcher has made acoustic recordings here of its identifiable echolocation sounds at a frequency beyond human hearing. The pallid bat is unique to dry grasslands and is only found in a few areas of the Okanagan. It’s on BC’s red list, meaning it’s vulnerable.

The researchers hope to find the remaining five species in the two nights that remain.

The rain is pouring down harder, with lightning flashes and thunder. I seek shelter in a large tent where biologists are preparing food to take with them for a night of bat observation. If the bad weather continues, the bats are unlikely to appear. The biologists themselves are a strange breed — some might consider them "batty" — and 27 of them from all over BC and some from Alberta are participating in the blitz. Like the bats they observe, they are nocturnal.

"We’re usually getting up around noon or one o’clock," says Isaac, indicating the scattered tents the biologists sleep in.

That’s not surprising because they often stay up through the entire night catching and documenting bats, only rolling into bed around sunrise. During the afternoon, they scout out locations and set up acoustic recording equipment. Isaac’s fellow lead biologist and a bat specialist, Cori Lausen, is out doing that with her team as I wait for Isaac’s group to set out. 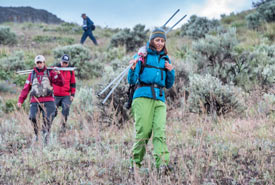 Tanya Luszcz carries down poles and other gear followed by René McKibbin and Doug Burles. (Photo by Richard McGuire)

The scouts determine the most likely spots where bats will appear, based on the right rock faces or trees for them to "hang out" in and the presence of water nearby that they’ll need. As well as bats, Isaac’s other specialty is snakes. I ask her what attracts her to these two animals that many people consider, along with spiders, to be repulsive.

"Maybe I just go for the underdog," she says, explaining that she finds a sense of discovery and there is an element of mystery in the nocturnal bats that communicate with sounds we can’t hear.

"We do a lot of outreach and talks with kids and the kids get it," she says. "I guess I’m a kid at heart. I’m just curious."

Bats play an important role in reducing insects like mosquitos that are pests to humans, as well as insects that harm agriculture and forestry.

When at last we set out after 5 p.m., the storm is showing signs of letting up. We’re headed for a canyon in the Sparrow Grasslands, the westernmost part of the NCC property, little more than a stone’s throw from the U.S. border. The road is rough and rocky as we follow it in a string of trucks, missing our turn and doubling back. When at last we locate Lausen’s team, a rainbow fills the sky and the grasslands are lit up in gold light. 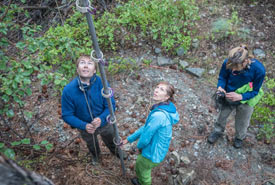 Cory Olson (left) and Tanya Luszcz check that the net will hoist correctly while Leigh Anne Isaac tries to untangle a net. (Photo by Richard McGuire)

The biologists unload equipment from the trucks, discussing what to take where. They throw around jargon like "triples" and "doubles," which refer to the fine mesh nets they’ll be stringing up to catch the bats.

We hike down into the canyon some 100 metres lower and locate the target spots that Lausen’s group has identified. The biologists debate the best position for the net, which stretches between tall poles like a 30-foot-high tennis net.

Our group spends more than an hour sorting, untangling and positioning the poles and net, finally raising it as though hoisting a flag. It’s about to get dark meaning bat activity could start.

Suddenly, a creature flies into the net. It’s not a bat, but rather a tiny yellow warbler. Biologist René McKibbin, a bird specialist who is new to bats, untangles the little bird and releases it.

Doug Burles has his iPad out with a special microphone attached and software running. It records the sounds of a few bats, which seem to fly high over the net, but none are caught. Then even those sounds go silent and there’s no sign of any bat activity. Burles suggests the conditions may not be right and we may not see any bats. It’s looking like the hours and effort I’ve spent getting here may not result in much of a story. 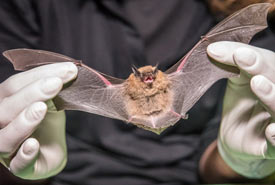 Suddenly, word comes over the walkie talkie that a bat has been caught at one of the nets near ours. Lausen is taking it to the top of the canyon for processing. I follow up the steep trail on the side of the canyon through the dark, guided by a miner’s lamp on my head.

The bat is a female California myotis, a species that has been caught previously in the blitz. Lausen weighs and measures her and examines her sex organs. She’s already had a pregnancy. The researchers want to know about the reproductive health of the bats. A DNA sample is taken from skin on the bat’s wing. Then the bat is released with no banding.

Moments later, an excited message breaks over the walkie talkies. A rare pallid bat has been caught at the net where I was earlier and is now being carried up the hill. The biologists are bouncing like excited children. Not only does this bring the number of species found on the property to 10, but it’s a rare bat that few of the researchers have ever seen.

Biologist Cory Olson arrives soon from below, carrying the bat under his clothes to keep it warm. It’s got sharp teeth and a strong jaw and it’s bitten him numerous times, but he’s beaming with excitement. 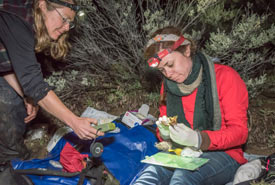 While Rochelle Kelly (right) prepares to measure a male pallid bat, lead biologist Cori Lausen tries to get an acoustic recording of its distress calls. (Photo by Richard McGuire)

The pallid bat, a male, is greeted with the same enthusiasm Justin Bieber might encounter from a group of teenage girls. It’s a rock star. Out come the phones and cameras to photograph its large ears and sharp fangs for posterity. There’s ooing and awing everywhere.

Biologist Rochelle Kelly asks to be allowed to process it, and Lausen gives her the honour. Each measurement is recorded. The researchers remove a tick from it and examine other parasites attached to it. Kelly tries to use an instrument to record its bite strength, but the bat only seems interested in biting his human examiners. 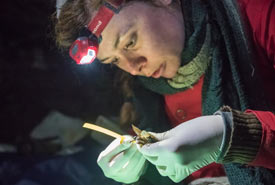 The bat has a fuzzy, down-like honey-coloured fur. It looks quite different from other bats.

By now it’s past midnight, so Isaac leads me up the hill and back to my car. It seems much steeper and higher climbing up in the dark. I ask her how she felt to see the pallid bat.

"I was over the moon," she said. "For me personally, it’s something I’ve never seen before, so I immediately started acting like a six-year-old and that sense of wonder."

Seeing the biologists so excited by a little creature made a happy ending to a long day and night.

This article originally ran in the Osoyoos Times on May 27, 2015 and is reposted with permission on Land Lines. 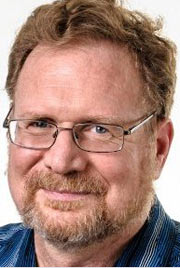 Richard McGuire is a reporter and photographer for Osoyoos Times in the southern Okanagan Valley of British Columbia.