Take a second look: Look-alikes in nature offer surprises in the field 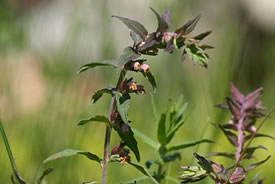 It was late on a hot August day. I and my field partner were hiking across the tall grass prairie on one of our newly secured properties when we found a withered little reddish-purple plant. At first glance we thought, “Dang, that looks like red bartsia!” Red bartisa (Odontites vernus) is an invasive species that has started creeping across Manitoba. We were not happy at the thought of finding this little guy.

Normally our discovery would have been immediately followed by additional surveys to find and map all the occurrences on the property and the development of a plan for the control and eradication of this species. However, the little specimen we found was shrivelled and had no flowers. Most of the leaves had fallen off and we only found a single plant....so we weren’t too sure of our identification.

Knowing that we had a volunteer botanist who would be surveying that same property for rare species the following year, we asked her to keep an eye out for red bartsia. But after her survey she reported finding  no red bartsia present. Instead, she identified a similar-looking native species, which she suggested was mostly likely what we had found.

Look-alikes are common throughout nature. In some cases a plant or animal has evolved so that it looks like a poisonous or distasteful counterpart in order to deter predators. Often two closely related species have only minute differences and require a practiced eye to tell apart. This time, the plant was simply in poor enough condition that we couldn’t really tell what it was, but because we knew red bartsia can be found in the area that was the initial conclusion we jumped to.

For a conservation organization such as the Nature Conservancy of Canada it is very important that we are confident in our ability to identify species. What would have happened if we just assumed that little plant was red bartsia? We would have wasted time planning and prepping for control and sending staff out to find and map a population that didn’t exist. However, since we acknowledged our uncertainty we were able to pair up a confirmation visit with another activity and saved ourselves unnecessary time and effort. 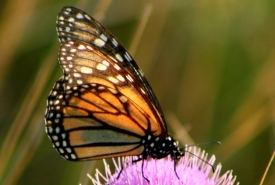 Sometimes despite our attempts at being objective, we see what we want to see. I've done it myself: I've seen a large orange and black butterfly flit by one day and immediately thought “ooh monarch!” but upon inspecting the photo later realized it was a viceroy. We are always on the lookout for significant plants and animals, whether they are species at risk or noxious invaders, and we must be careful not to get too focused on what we WANT to find. 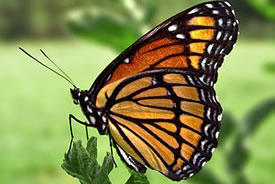 I have learned that it is important to not be too proud or afraid to admit that you are unsure and ask for a second opinion. We can’t be experts on everything! In Manitoba we draw on many partner organizations in order to tap into a wide range of expertise, such as the Invasive Species Council of Manitoba, the Manitoba Association of Plant Biologists, the Manitoba Conservation Data Centre and the Manitoba Breeding Bird Atlas. It is integral to our work that we collect the most accurate data possible as it feeds into all of our conservation activities, including invasive species control, managing habitat for rare and vulnerable species and monitoring the health of our ecosystems.

So as the field season approaches, be sure to take a second look. There’s always something new out there waiting to surprise you! 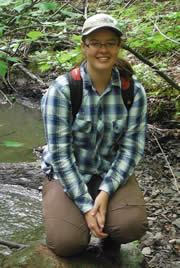 Rebekah Neufeld is an assistant conservation biologist for the Nature Conservancy of Canada's Manitoba Region.