The elephant in the woods 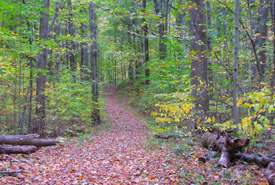 Settled Southern Ontario still has magical places where you can experience the grandeur of wild nature. Backus Woods, just north of Lake Erie’s Long Point, is such a place. This is where forest cycles play out largely as nature intended. Backus Woods has towering tulip-trees, ancient black gum, scented sassafras and armies of stately oaks that would make Napoleonic-era ship-builders drool. This is truly an OMG forest.

Years ago I spent two summers doing field work in and around Backus Woods, and got to know its trees very well. Among my favourites were gargantuan American beech trees. Their massive stems speak to the loads they bear, as they draw your eye up to the huge canopy they support overhead. Squint at them the right way and their smooth grey tree trunks become so many wrinkle-kneed elephant legs, in a crazy Salvador Dali kind of way.

Backus Woods oozes ecological integrity, as they say. But it is not immune to invasions. Introduced killer organisms are at work in the forest, and more are on the way. 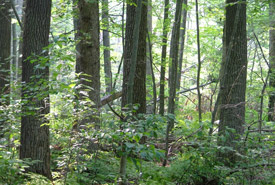 In 1930, “Dutch” elm disease entered North America on the backs of bark beetles munching on imported wood from China. The disease swept across the continent, killing most adult American elm. Even earlier, chestnut blight fungus arrived on ornamental Japanese chestnut plants. Their spores blew across the land, unaided and unstoppable, killing the then-dominant species of many woodlands. These diseases forever changed the face of eastern forests, including Backus Woods. 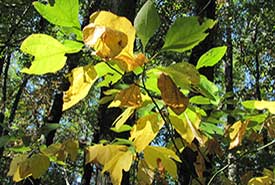 But the forest is not pock-marked with empty craters where these trees once stood. It has grown to fill these gaps. In the case of chestnuts, ecologists say that native oaks have largely taken the place of these former forest giants. Backus Woods adapted.

Unfortunately a new wave of invasions is hitting Ontario, and beech is the next victim. Beech bark disease is caused by a European scale insect (picture a small bulbous fish scale), whose feeding wounds invite the entry of damaging and lethal fungi. Emerald ash borer, an Asian beetle, feeds on and kills all ash trees, and has already left a wave of destruction across southwestern Ontario.

Then there's Asian long-horned beetle, which is not yet so widespread but attacks many species, including our native maples. Last but not least, there is butternut canker, an introduced fungus that creates lesions that spread around the tree, choking it to death. Scientists don’t know for sure where this one even came from.

This is the real elephant in the woods for me. I tend to avoid thinking or talking about these introduced forest pests and pathogens and the changes to come. I don’t like imagining the devastating effect they may have on Backus Woods or, closer to home, on the Happy Valley Forest north of Toronto.

When I dwell on it my heart sinks. It is a different OMG moment. But this is a new reality that we need to plan for and look beyond.

The Nature Conservancy of Canada (NCC) is committed to maintaining the biodiversity of the forests we conserve. Many staff-years and countless volunteer hours are spent delivering strategic attacks against invasive plants on our properties, for example. This is having positive effects on habitats across the province, and may give our forests added natural strength to deal with new threats. There is little we can directly do, however, to prevent the spread of the small airborne pests and pathogens that are upon us.

NCC, for now, for the most part, and where public safety is not at risk from hazardous dead trees, will be leaving the forest to take the brunt of this onslaught. Nature will be given a chance to develop its own responses to these invasive insects and diseases over time. But we will be watching.

We will watch for trees with resistance that remain standing, for research or restoration projects. We will learn how the impact differs between small and large woodlands of different species mixes. And we will monitor critically endangered species to see if they need special attention and action. We will take action where we can make a difference.

Our protected woodlands will adapt to this ecological stress and we will be watching as stories of resilience unfold. One thing is for sure. There will be a whopping big increase in the dead and dying trees out there. And our woodpeckers will be the beneficiaries. Wild nature will respond.

And I will be cheering it on.