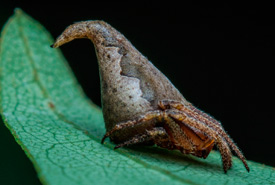 Each week, countless inspiring and informative stories are published about conservation successes or new discoveries in nature and wildlife around the world. The Friday Five is a weekly roundup of some of the conservation and nature stories that caught our attention the week of December 12, 2016:

Not your average “house” spider

Muggle scientists have discovered a spider that resembles the mythical Sorting Hat from the beloved Harry Potter series.

A story worth painting

Despite India banning the illegal trade of the species in 1972, mongoose are still being hunted to make expensive paintbrushes for westerners.

More than meets the eye

Originally thought to be a fragment of a plant, this curious piece of amber contains a 99-million-year-old dinosaur feather.

A new Canadian study suggests that this condition could have been one of the reasons that Sir John Franklin’s 1846 Arctic expedition failed.

New research shows the galloping evolution in seahorses, and it’s about as quick as a race horse!