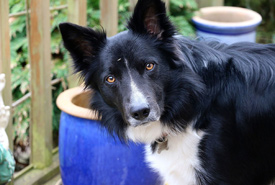 Each week, countless inspiring and informative stories are published about conservation successes or discoveries in nature and wildlife around the world. Here are some of the conservation and nature stories that caught our attention the week of June 27, 2016.

Gracie is a canine on a conservation mission: her job is to mitigate potentially dangerous human-wildlife encounters. She’s the first dog of her kind to be herding bighorn sheep and mountain goats away from Logan Pass in Glacier National Park, an area with high tourist activity. There’s much to learn for Gracie and her trainer while on the job.

Read about these real-life “PAW Patrols” >

These people are stealing birds’ eggs to save the species

After we introduced “fawn-napping” in last week’s Friday Five, we stumbled across this case of egg-napping. But little do spoon-billed sandpiper parents know the cause behind the theft of their precious parcels: ornithologists are attempting to bolster the numbers of these critically endangered birds. Threats to spoon-billed sandpipers include hunting in South East Asia and habitat loss in the Yellow Sea, a key migratory stop along the Asian Australasian Flyway.

Read about the plight of the spoon-billed sandpipers >

Like time capsules, amber holds the key to unlock many prehistoric mysteries, including revealing the wing structure of feathered dinosaurs. This is the case with an amber named “Angel Wing,” discovered in northern Myanmar.

Learn about this discovery >

This simple new road rule could help save our native wildlife

Research shows just reducing a vehicle’s speed by 10 per cent can reduce chance of collision by 20 per cent. That’s exactly what some conservationists are calling for: to implement a reduction in traffic speed from dawn to dusk. These restrictions are already in place in certain areas of Tasmania and Victoria, and they’re hoping to bring it Kangaroo Island, just off the mainland of South Australia.

Twinkle, twinkle little stars…How I wonder what you are. And wonder is right, when you’re inside New Zealand's Waitomo Caves. Dangling from the seemingly starlit ceiling are carnivorous worms that emit an attractive glow. If you’re a moth or insect, you just might want to make a U-turn away from these deadly glowing traps.

Watch this video to learn more >