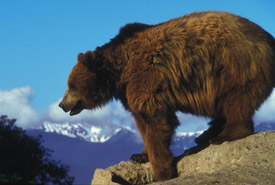 Each week, countless inspiring and informative stories are published about conservation successes or new discoveries in nature and wildlife around the world. Here are some of the conservation and nature stories that caught our attention the week of March 7, 2016:

Has solar power gone to the birds? Not quite. A new initiative in the UK will aim to increase habitat for endangered species such as skylarks and turtle doves, in addition to pollinators such as bees and butterflies. By planting wildflower meadows and planting in unused areas of the farms, the plan's proposal hopes to reestablish habitats that have traditionally been converted due to agriculture.

Find out more about what they plan to do >

This week social media channels across the interweb went wild for a small, light purple aquatic octopus they soon dubbed Casper the Friendly Ghost. Scientists are saying that this octopus, recently discovered off the coast of Hawaii, could be a new species. We have to admit we understand the social media fandom: it is a pretty charismatic animal.

See for yourself in this video >

Imagine: you're wandering through the forest, minding your own business; when suddenly, your little feet get trapped by a river of sticky resin. That's probably what happened to this amber-encased lizard a long, long, long time ago, say scientists.

More about the fossilized lizard here >

At first blush, it sounds like good news: last week the U.S. Fish and Wildlife Service declared that grizzlies in the Greater Yellowstone Ecosystem had recovered enough that they no longer need protection under the Endangered Species Act. And while Yellowstone's grizzly population now numbers close to 720, conservation groups in the U.S. voiced serious concerns over the decision.

Read why conservationists are concerned about this decision >

As the example above illustrates, conservation is by no means a simple undertaking. And when it comes to invasive species (or is it non-native?) the debate can rage on for hours...While most invasive species are considered harmful to ecosystems, some conservationists argue that some non-native species, such as bees, may actually be beneficial.