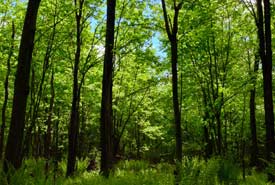 Forest in Saint-Georges-de-Clarenceville (Photo by NCC)

Each week, countless inspiring and informative stories are published about conservation successes or new discoveries in nature and wildlife around the world. Here are some of the conservation and nature stories that caught our attention the week of March 14, 2016:

The global solution to extinction

When faced with a problem as overwhelming as extinction, few people would say they have the solution. But in this New York Times story, E. O. Wilson, who has been called the "father of biodiversity," offers a passionate plea for global conservation as a solution to one of the 21st century's most pressing issues.

See what he has to suggest here >

In recent years there have been a number of discussions about the health, economic and environmental benefits of forests — from forest bathing, to carbon storage, to water filtration and everything in between. But now a group of researchers in Europe have been able to demonstrate that a more diverse forest yields even more benefits.

Learn more about the benefits of diverse forests >

Why would you plant coastal redwoods, native to California, 5,000 miles away in Cornwall, England? This project in southwest England, dubbed the Eden Project, is an attempt to conserve the trees for future generations. Cornwall's climate, which closely mirrors that of California, is thought to suit the coastal giants.

More about the Eden Project >

What role can virtual reality have in wildlife conservation and environmental education? This was a question tackled by app developers and digital specialists at SXSW recently. From whether to stream live video, to how to set up 360-degree GoPro cameras to film wildlife, staff from the Zoological Society of London discussed the possibilities of VR for conservation.

Find out what they really had to say about virtual reality >

How Asian carp could become Lake Erie's most common fish

There's a scaly threat moving quietly towards the Great Lakes: Asian carp, an invasive non-native species. If left unchecked, Asian carp could one day become the most common fish species in Lake Erie. This is however a unique opportunity to stop invaders before they become a problem, says Mark Gaden of the Great Lakes Fisheries Commission.

Read about this threat and what's being done about it >