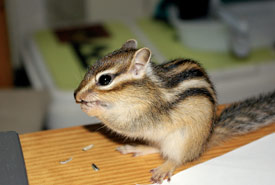 Each week, countless inspiring and informative stories are published about conservation successes or new discoveries in nature and wildlife around the world. The Friday Five is a weekly roundup of some of the conservation and nature stories that caught our attention the week of October 31, 2016:

Ocean in a "chokehold"

The sight of the beaches on the west coast of Vancouver Island has left one volunteer speechless. Despite a $140,000 coastal cleanup and 40 tonnes of garbage, consisting of mostly plastic, the shorelines were still littered with trash. Rob O’Dea and his team were able to rid the beaches of five to 10 percent of garbage, but insists more work needs to be done to keep these areas clean.

Pick up the story here >

Scientists have recently discovered the reason for chipmunk and other rodents’ pinstripes: it’s all in the genes. A protein previously known to be a key player in the facial development of the species has undergone a facelift (two to be exact) and now creates the light stripes on rodents.

Washing away drought means more than a rainfall

Officials in New Hampshire are stressing the importance of conserving water during the area’s current drought conditions. Despite heavy rainfall in the southern part of the state, New Hampshire joins the many areas effected by climate change, and water conservation has become more critical than ever.

In an effort to increase the population of Puerto Rican crested toad, a critically endangered species native to the island, the North Carolina Zoo has sent 400 tadpoles to Puerto Rico to be released. The zoo hopes this conservation effort will help rehabilitate the species' population in the area.

Jump into the story here >

Deep at the bottom of the ocean lie many unknowns; some too small to be seen by humans. However, there is one mystery that has been heard, although it may not have been seen. Members of a remote community in Nunavut have reported hearing a “pinging” sound emanating from the sea floor that is scaring animals away from the area.