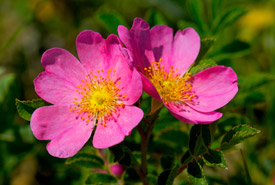 Each week, countless inspiring and informative stories are published about conservation successes or new discoveries in nature and wildlife around the world. The Friday Five is a weekly roundup of some of the conservation and nature stories from around the globe that caught our attention the week of February 15, 2016:

A picture worth a nod from National Geographic

Ian McAllister's photograph of a rare sea wolf has been announced as one of National Geographic’s 20 favourite photos of 2015. The unique species was captured with an underwater camera and the result is breathtaking. McAllister is a BC resident and executive director of Pacific Wild. He recently collaborated with award-winning author Lorna Marsden on The Wild in You, a photo and poetry collection inspired by the Great Bear Rainforest.

Under your glove should be a green thumb

“At least we’re half way through winter,” should not be the motto to get you through the below-freezing temperatures. Instead, here is your new survival guide, published in The Toronto Star this week.

A new take on student residence

This Globe and Mail story introduces us to Michael Jefferey, a first-year outdoor and experiential education student at Thompson Rivers University in BC, who is taking his studies to a whole new level. Jefferey has built his own yurt on the outskirts of Kamloops and plans on living there throughout his degree.

Conservations have urged for immediate action to stop armed militia and illegal mining endeavours in protected central African forests in an effort to save the elusive okapi, according to this article in the guardian. This 10-year plan to save the horse-sized “forest giraffe” intends to give the species the privacy it needs to survive.

Read about the effort here >

A student's plan to get cities growing