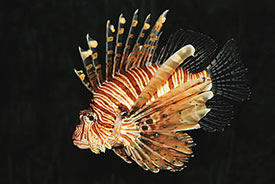 Each week, countless inspiring and informative stories are published about conservation successes or discoveries in nature and wildlife around the world. Here are some of the conservation and nature stories that caught our attention the week of July 18, 2016.

The already threatened ecology in the Mediterranean has a new opponent: the extremely venomous, invasive and opportunistic lionfish. This follows the rapid spread of the predator across the eastern Atlantic, with the lionfish female able to produce two millions eggs annually.

3D printing to the rescue, nature-style

An African penguin named "Purps the penguin," who’s been vetted at an aquarium in Connecticut, is the latest rescuee from an unconventional hero: 3D printing. The Mystic aquarium partnered with Mystic Middle School and used their 3D printer to create a customized durable boot that will help the penguin improve its mobility.

Biodiversity loss on the rise worries many

A comprehensive study published in the journal Science last week warns that biodiversity may now be below safe levels in over half of the planet’s land. The analysis of 39,123 sites points to habitat destruction from human development as the main reason.

Just how close is too close?

The debate of human vs. wildlife has been especially contentious this year, following the Yellowstone bison calf, Cincinnati zoo gorilla and Disney resort alligator incidents. Now, a Canadian man identified as “Steve” from a Facebook video gone viral is under some heat after walking into the ocean just metres away from a feeding grey whale on Vancouver Island. While marine mammal experts are condemning the situation, many on Facebook were quick to defend Steve’s actions. Which raises the question, just how close is too close?

Read more to see how the man vs. wildlife debates inches on with this Canadian example >

Northern African countries such as Morocco really feel the heat (literally) when it comes to difficulties posed by climate change. An innovative project funded by the International Development Research Centre called GIREPSE used online technology to help warn villagers about climate complications such as floods.