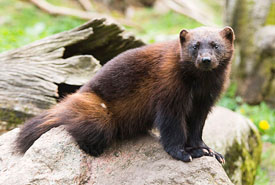 Each week, countless inspiring and informative stories are published about conservation successes or discoveries in nature and wildlife around the world. Here are some of the conservation and nature stories that caught our attention the week of July 25, 2016.

Think back to all the days you took a walk in the woods and saw some flaky, green, stringy things on a tree bark, or back in grade school when you learned that this flaky organism is called lichen, which occurs as a symbiotic relationship between fungi and algae. But a study published in the journal Science recently suggests that there’s a third factor in the mix: a new kind of yeast.

Rethinking the concept of photosynthesis

Researchers at the University of Illinois have been diligently tracking the daily and seasonal performance data of how the Amazon may respond to potential long-term droughts in response to climate change. By measuring photosynthesis rates across the landscape that learned that the dry season in the Amazon has increased photosynthesis compared to during heavy rainfall, most likely due to cloud cover reducing light exposure.

Whale corpse discovered to be a new species

A seven-metre-long corpse of what was believed to be a Baird’s beaked whale found in the Atlantic shores back in June 2014 is a grand biodiversity mystery unraveling right before our eyes. Belonging to the genus Berardius, the only previous accounts of this species were by Japanese fishermen, who called these whales karasu, meaning raven, and also a skeleton of the whale hanging in a high school gym in the Aleutian Islands!

See what steps scientists are taking next upon this biodiversity discovery >

What a tough oyster!

Olympia oysters are native to the west coast of Canada and the United States. Similar to most edible oysters, they have been excessively over-harvested. While the populations are slowly recovering, a new discovery by Oregon State University sheds some hope. As a result of Olympia oyster’s slower calcification rate (rate of development of shells in oysters and mussels), these oysters are actually resilient to the effects of ocean acidification because of reduce sensitivity in early stages of their growth.

Footage of a wolverine in Sierra Nevada excites many

Wolverine populations were believed to have been wiped out in the early 1920s, but a rare sighting of a wolverine last seen in 2008 was captured on video this week roaming in the Tahoe National Forest in Sierra Nevada. Scientists are awaiting DNA results to confirm that this is the same wolverine spotted in 2008, with wildlife biologists from the California Department of Fish & Wildlife believing that it is the same individual. The potential to restore larger carnivores in California is a prospect that excites many in the state, with plans to reintroduce wolverines in the wild.