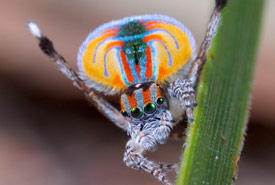 Each week, countless inspiring and informative stories are published about conservation successes or discoveries in nature and wildlife around the world. Here are some of the conservation and nature stories that caught our attention the week of June 6, 2016.

Is untouched nature largely a myth?

The idea of returning environments to their pristine state is a hope for many people. But scientists argue humans have been impacting the face of the Earth, from land to species large and small, for tens of thousands of years. Human-caused extinctions have been happening since 50,000 years ago, and researchers say the scope and scale of the impacts nowadays are simply progressing at “ridiculous levels.”

Read about how humans have altered the landscape >

Hippos “stressed” by profound loss of their natural land in Africa

With the drying of the Great Ruaha River in Africa (increasingly so due to water extraction for human use) the common hippo is taking longer treks to find its daytime resting sites. Hippos beat the heat by submerging themselves in water and are experiencing higher stress from a lack of available aquatic habitats. As a result, they may be exhibiting higher aggression and competition for food.

Read about the case of hot hippos >

Minecraft tree of global importance likely the tallest in the tropics

A tree as tall as 20 double-decker buses discovered in Malaysia’s Maliau Basin Conservation Area was found by an aerial surveying machine that scans rainforest canopies. The tree, a yellow meranti, is an endangered species on the IUCN Red List. Computer game players may know this species as one that can be grown in the world of Minecraft, making it more prevalent there than Earth.

Read more about the conservation of this giant >

Hope for saving the world’s oceans

“Hope Spots” may be a new way of focusing marine conservation efforts around the world. These target sites, made up of unique ecological characteristics, are being nominated by conservation groups around the world and will undergo a rigorous selection process. The hope for “Hope Spots” is to create an enhanced network of marine protected areas that will allow the ocean to regenerate back to a healthy state.

Read more about this global project >

Spiders may not be commonly associated with the word "cute," but take a look at these peacock spiders perform hypnotizing dances by waving their legs and iridescent stomach flaps. Biologists say even people who hate spiders may now find them adorable.